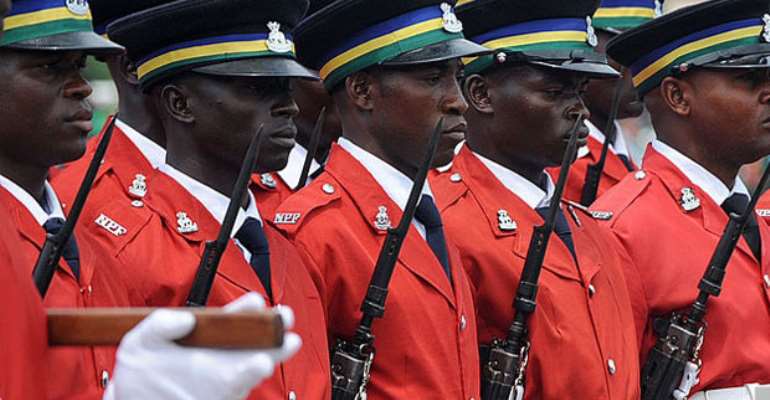 President Nana Addo Dankwa Akufo-Addo has charged the 107 newly commissioned officers of the Ghana Armed Forces (GAF) to make it a priority to protect the interest of Ghanaians and to safeguard Ghana's territorial integrity.

Addressing attendees of the 2017 Ghana Military Academy Graduation Parade of the Regular Career Course 57 and Short Service Commission/Special Duties Course 55 at the Academy Square, Burma Camp, President Akufo-Addo said the new officers must not use their new roles to antagonize citizens whose taxes were used to train them.

“It is important that our new graduands remain conscious of the people they are to protect. Do not forget your responsibilities… You must at all times discharge your duties diligently,” Nana Addo said.

He also enjoined the officers to carry out their responsibilities professionally and diligently.

Breakdown of Graduation Groups
A total of 107 Cadet officers have been commissioned as officers by the President and Commander in Chief of the Ghana Armed Forces. The breakdown of the group of graduating teams is as follows;

2. Graduating Cadets, Regular Career Course 57 (Army), Allied Cadets – 4 Officers. 2 each from the Republic of Benin and Republic of Guinea.

The School provided six months preparatory training for selected cadets from the British West Africa colonies:- Nigeria, The Gold Coast, Sierra Leone and The Gambia, prior to their being sent to the UK or other overseas countries for further officer training and commissioning. Since its establishment, the Academy has produced over 3,000 Ghanaian Officers now serving in various capacities in the Armed Forces and in the country as a whole.

The Academy has also trained cadets from some sister African countries, notably Uganda, Liberia, Sierra Leone, Burkina Faso, Benin th and The Gambia. The first commissioning ceremony was held on 30 September 1961 for 35 officer cadets. In 1961, the Ghana Government arranged for a joint Military Training Team from Britain and Canada to continue with training until suitably experienced and qualified Ghanaians were ready to take over. This assistance ceased in 1974. From then, the Academy was manned entirely by Ghanaian Staff until 1June 1984 when it was decided to modify the training syllabus in line with current trends in other renowned Military Academies.

I Wish You Die In Prison — Judge To Convict Who Defiled His ...
38 minutes ago