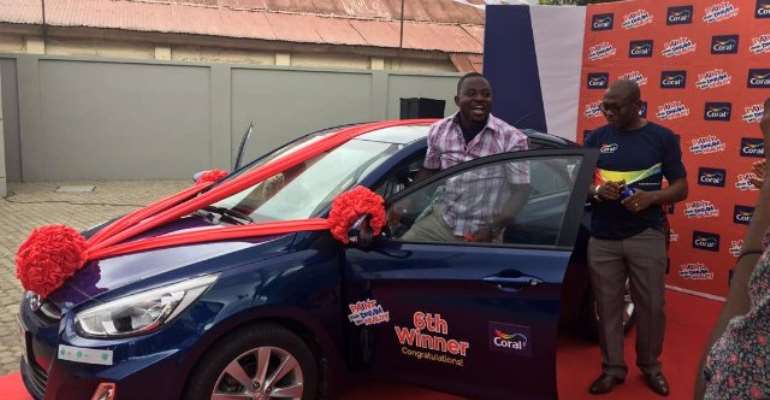 Coral Paints has handed over the sixth and last brand-new Hyundai Accent saloon car to a 36-year old electrical engineer, Francis Karikari Owusu in the ‘PAINT YOUR DREAM INTO REALITY’ promotion.

Mr. Owusu is the last winner of the six-month promotion, which started in April this year and ended in October, thus wining the sixth brand-new Hyundai Accent Saloon car.

Coral Paints in the last five months presented five new cars to five different winners after they found the dummy key in the Coralatex 18L pails.

Mr. Owusu received the keys to the brand-new Hyundai Accent saloon car from the General Manager of Coral Paints Ghana, Yaw Bonnah-Sarpong at the Coral Colour Centre in Accra on Thursday.

Presenting the keys to the Electrical Engineer, Mr. Bonnah-Sarpong expressed appreciation to all the previous winners and those who won shirts during the promotion period.

He said Coral Paints will continue to create innovative activities to reward and excite their numerous clients for their support over the years.

Receiving the keys to the brand-new Hyundai Accent car, Mr. Karikari Owusu thanked Coral Paints for making his dream come into reality after having dreams of driving an old car.

Narrating how he won the car, he said his boss bought four of the Coralatex 18L pails to repaint his office, but upon reaching the office, his boss asked him to unpack the paints in order for the painters to start work.

According to him, it was upon seeing the receipts of the paints that he realised Coral Paints was running a promotion, hence he decided to open the paint buckets himself to see if he will find the dummy key.

“After opening the second bucket of paint, I saw the dummy key and quickly called my boss to inform him about it and fortunately for me, my boss asked me to take it because I found the dummy key,” he noted.

He sent the dummy key to the Coral office where he was asked to present the receipt of purchase and the dummy key, which he did and thus was confirmed the sixth and last winner of the six cars.

“I used to pressurize my boss to buy me a car as I once dreamt of driving an old car, though I don’t own a car, so winning this car is a dream come true and I am grateful to my boss for allowing me to take the car,” he stressed.

Business Development Manager of Coral Paints, Luiz Carlos Da Silva, said buying Coral Paint was a good investment because of the durability of the paints on the walls.

Mr. Da Silver further explained the features of the Coralatex 18 Litre pail and added that “we willingly chose the Coralatex as the star of the campaign because it is the product with the highest spreading rate on the market (375m2 per 18L bucket) and the only Premium Acrylic Emulsion with UV resistant pigments. This means that the colours will keep their original shade without fading for a very long time.”

Coral started operations in Ghana in 1989 and operates in all regions of the country.

The ‘PAINT YOUR DREAM INTO REALITY’ is the company’s third promotion campaign. In the first promotion in 1995, the winner received a brand new house.

In the second promotion, Coral Ghana sponsored some customers on an all-expense paid trip to Brazil to watch the national football team, the Black Stars at the FIFA World Cup in 2014.