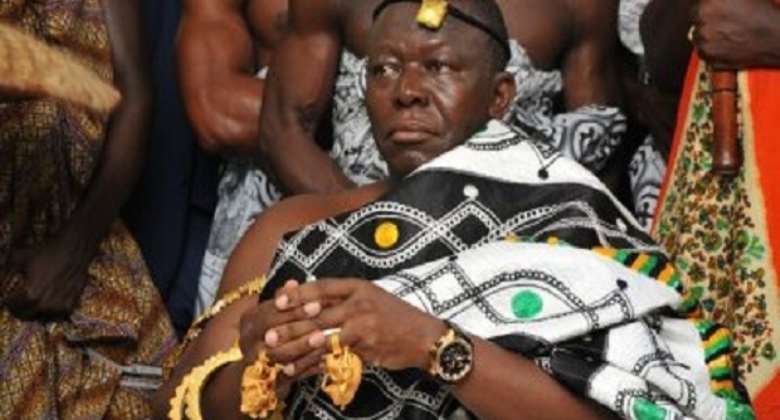 King: “And, in the calmest and most stillest night, With all appliances and means to boot, Deny it to a king? Then, happy low, lie down. Uneasy lies the head that wears a crown”. Henry IV Part 2 - William Shakespeare

MY HEART MISSED A BEAT. It 'skipped a beat'. It 'stood still'. I asked various questions: for which I did not expect an answer: Who! When! Why! How! What! The questions were rhetorical. The screaming headline read: “Otumfuo's £350,000 cash causes stir in U.K.” That was Daily Guide of Thursday, October 12, 2017. The story read: “A staggering £350,000 deposited into the personal account of the Asantehene Otumfuo Osei Tutu II in the U.K. has generated a controversy in the country. Officials in the U.K., according to news reports in some U.K. newspapers, are suspecting money laundering but so far no invitation has been extended to the office of the Asante monarch. One Mark Arthur, a British – Ghanaian, who reportedly deposited the colossal amount into Otumfuo's personal account at Ghana International Bank in the U.K. has landed in trouble, as he has lost his job at the bank…”

Then in an about – turn, a volte-face, on Friday, 13th October, 2017. Daily Guide headline whimpered: 'Otumfuo is clean'. In another sniveling headline, the paper wrote: “U.K. Bank clears Otumfuo”. The story following this headline was: “There has never been any suggestion by the bank that the king was or is involved in money laundering. In fact, we have no evidence to that effect. The bank has not in any of its submissions questioned the integrity of the king. The bank has maintained a long-standing relationship with the king and has worked closely with him on initiatives such as the Otumfuo Education Fund to provide IT education to children in deprived communities… we are alarmed and disturbed over the false report which is concocted to suggest that the king erred…”

A charge of money – laundering? Do you know it is an international crime? Money laundering is the process of transforming the profits of the crime and corruption into 'legitimate' assets, it is a financial and business crime, hinged on the financial systems on securities, digital currencies, financing of terrorism as well as evasion of international sanctions. 'Dirty' money obtained from various crimes is 'cleaned' by layering with legitimate earnings and integrated into the cash flow.

Money laundering dates back into ancient times and it goes with the development of money and banking, with individuals hiding their wealth from the state to escape taxation and confiscation

In China, around 2000 BC, big – time merchants would hide their wealth from rulers who would take it from them and even banish them. They would, therefore, hide it or invest it in businesses in remote provinces or even outside China.

There is a strong international campaign to seize proceeds of drug crimes so as to nab the heads of drug cartels. Money laundering laws tend to make individuals responsible for proving that the source of funds is legitimate.

Deutsche Bank suffered a fine of $630 million for their inability to prevent Russian money laundering to offshore bank accounts.

Back to the discredited story on Otumfuo. It was trending on the social media. It was dirty, and I praise those who challenged the story – to the point of swaying into the realm of ethnicity and tribalism. One Dr Yusuf Bala Usman remarked (in response to someone who defended Otumfuo): “If you are emotionally attached to your tribe or political leaning to the point that truth and justice become secondary consideration, your education is useless. If you cannot reason beyond petty sentiments, you are a liability to mankind”.

Just while I was lamenting over such pieces, my attention was drawn to one by Kwabena Nyarko of Dichemso, Kumasi (Daily Guide, Friday, October 13 2017): “Had it been a monarch from the Middle East or one of the rich dudes in the Western World to whom the British imperialists are beholden, this Otumfuo Osei Tutu II issue would not have surfaced anywhere … such transactions by Western known rich people go on daily but they choose and pick who they want to call out. This is an attempt to humiliate Africans and nothing else. Those jubilating for tribal reasons – the imperialists do not see tribe. It is directed at all Africans”. Quite remarkable. Dr Agyenim Boateng, in his capacity as President of the Concerned Youth of Asante spoke the mind of many an Asante when he stated that the story was “cooked to degrade the name of His Royal Majesty of the Asante Kingdom.” What is all the long story about an Uber taxi and a bullion van?

It is heartening to note that Otumfuo Osei Tutu II is ranked by the Forbes Magazine as Africa's 5TH richest King, after King Mswati III of Swaziland ($50m), the King of Ile – Ife ($75m), Oba Obateru King of Iboland in Nigeria ($300m), the King of Morocco ($26 billion). That was in 2014. It is reported that Otumfuo's company, Transpomech Ghana, supplies mining equipment to a number of industrial companies in Ghana. Otumfuo is said to own a large stretch of real estates in Ghana and South Africa. He also possesses a large collection of valuable gold crown jewels.

Otumfuo, in his capacity as the great Monarch of Asante, no doubt, knows his commitments. He cannot be deceived into believing that he has got 'lovers' all over the world. He has not forgotten all too soon the bitter rumour that was circulating about his demise when he was holidaying in South Africa. He believes in the international law. And he knows the limits of the courtesies made available to him. Let me tell of a personal experience. In 2005, I was approached by an agent who was clearing a vehicle for a close relation of a big man. The agent expected me to extend some courtesies to that big man. I asked: “Is the big man not capable of settling the financial obligation? Please, go ask him. Give him my name, and politely tell him that I have asked you that question.” My friendship with the agent was terminated, but the big man knew better! All of us have a heavy task: To protect our integrity—as royalty, as politicians, as men of God, as people in responsible positions…

The banks in the U.K. must have laws and rules that should protect the confidentiality of their customers. We want to believe that there should be 'protocol' banking or 'privileged' banking. One does not expect a potentate to carry his own money in a portmanteau or 'Ghana—Must—Go' bag to a bank like an ordinary customer. We must be careful about the extent to which we stretch 'equality' and 'equity'. This is good admonition for those who sit on radio and those who write. Did someone remind me of Matthew 7:20? “Therefore, by their fruits ye shall know them”.