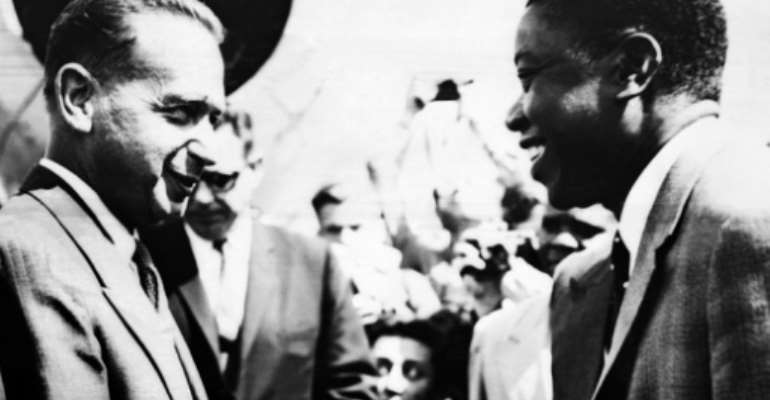 UN Secretary-General Dag Hammarskjold, welcomed by MoÃ¯se Kapenda Tshombe, leader of the Katanga province of Belgian Congo, now the Democratic Republic of the Congo, in 1960. By (AFP)

Sweden has called "an open wound" the unsolved questions over Hammarskjold's death, which came during the Cold War between Western nations and the Soviet bloc.

The latest findings take into account newly-released information from the archives of Belgium, Britain, Canada, Germany and the United States.

Hammarskjold, a Swedish diplomat who had been the UN's second secretary-general since 1953, was on his way to negotiate a ceasefire for mining-rich Katanga province in what is now the Democratic Republic of Congo when he died along with 15 other people.

His plane crashed on September 17 or 18 of 1961 near Ndola, in northern Rhodesia, now known as Zambia. Early inquiries said pilot error was to blame but an independent commission in 2013 noted the possibility of "hostile action" and called for further investigation.

The new report by a former chief justice of Tanzania, Mohamed Chande Othman, was presented to UN Secretary-General Antonio Guterres in August after reviewing the secret files.

"Based on the totality of the information we have at hand, it appears plausible that external attack or threat may have been a cause of the crash," said an executive summary seen by AFP on Tuesday.

The plane registered as SE-BDY may have been downed "by way of direct attack causing SE-BDY to crash, or by causing a momentary distraction of the pilots," it added.

Othman said there was a "significant amount of evidence from eyewitnesses that they observed more than one aircraft in the air, that the other aircraft may have been a jet, that SE-BDY was on fire before it crashed, and/or that SE-BDY was fired upon or otherwise actively engaged by another aircraft."

Such evidence "is not easily dismissed," he said.

Katangan rebels and their jets

The judge zeroed in on new information concerning aircraft operated by Katangan rebels, who opposed Congo's independence from Belgium, suggesting they had more air power than previously thought.

Previous inquiries had dismissed the theory that Katangan forces may have shot down the plane because it was believed that they had only one jet -- a French-made Fouga -- at the time.

New information provided by the United States and other sources showed that three Fouga aircraft were purchased from France and delivered to Katanga in 1961 "against objections of the US government."

Other planes, including one from West Germany, were available for use in Katanga and several airfields were employed by Katangan forces in the region, according to the new information.

Documents received from Britain and the United States appear to establish for the first time that both countries had agents in and around Congo at the time of the crash.

This showed that further information on the cause of the crash may be found in the intelligence, security and defense archives of member-states, said the report.

Othman said he was unable to verify a claim by a Belgian pilot, "Beukels," who told French diplomat Claude de Kemoularia in 1967 that he shot down or forced the plane to crash.

Requests for information were also sent to South Africa, which is said to have documents on "Operation Celeste," a purported plot to kill Hammarskjold, but access to those has not yet been granted.

Russia and France have also been asked to provide documents.

Othman recommended that governments appoint a senior official to scour their archives, with particular attention paid to radio intercepts and related records.

The report is expected to be presented to the UN General Assembly which in 2014 adopted a resolution that called for a full investigation to shed light once and for all on Hammarskjold's death.