In Solidarity With The Daily Post And Michael Dokosi 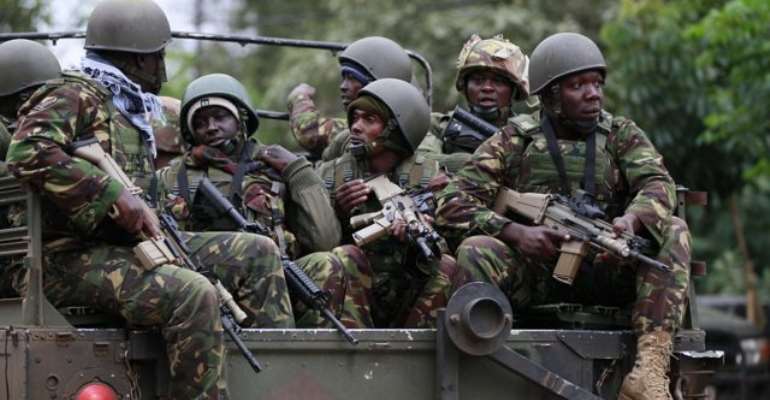 We at the Ghana Palaver have learnt with outrage,that unidentified men from the Ghana Armed Forces were sent in the dead of night to harass and rough up the editor of Nima-based publication, the Daily Post, last week.

Our information is that the goons arrived in an unmarked van and demanded from staff of the newspaper, the whereabouts of their editor. As providence would have it, Mr Dokosi was not at the premises hence escaped what would have been potential harm.

The impromptu visit by the hoodlums, stemmed from a publication in one of last weeks’ editions of the paper, a story to the effect that some men and women of the Armed Forces were livid over the breaking of a promise by government to pay them a specified amount of money upon return from duties abroad.

All that was required if the Military High Command felt that the story was inaccurate was the issuance of a rejoinder through their highly-professional and respected Public Relations outfit.

Instead of this, thugs were packed into a van and sent in pursuit of the editor of the paper. This is a monumental embarrassment to an institution that has over the years carved an enviable reputation for itself. Many polls among Ghanaians show that the Ghana Armed Forces is the most respected institution in the country. That institution enjoys tremendous goodwill from the people of Ghana and it would serve them well if they stuck to doing the things that have earned them a warm place in their hearts.

We are almost certain that the cowardly resort to intimidation and harassment as a means of exacting retribution against a newspaper that published an uncomfortable story was the handiwork of political operatives in the Akufo Addo administration. We would not be surprised if it was sanctioned at the highest levels of government.

This government has not hidden its affinity for violence and thuggery as a means of addressing disagreements. The setting up of militant groups under blood-cuddling names and the many acts of violence and mayhem visited on many innocent sections of our population provide more than ample evidence of this.

They have also moved to politicize just about every state institution with hard-nosed political operatives and family members sent to man them. We had hoped that the chaos and blood shed that the Akufo Addo government has so glaringly given tacit support to, will have been limited to the actions of their party thugs.

Little did we know that the cancker has eaten deep into the fabric of the most respected state institutions such that they have joined the fray to commit atrocities against the very people they have sworn to defend.

This incident adds to a series of actions that have called into serious question the democratic credentials of President Akufo Addo. It would appear that his many flowery speeches and exhortations on democracy and belief in the rule of law are but a ruse intended to mask a more sinister object to cow opponents into submission. We are yet to recover from the mistreatment of vociferous serial caller, Appiah Stadium, who was unlawfully and needlessly arrested by the police a couple of weeks ago for allegedly insulting the President. We are currently grappling with attempts to close down critical radio stations through the imposition of mind-boggling and unrealistic fines.

We wish to make clear to the Akufo Addo regime and the hawkish characters fanning the flames of suppression of free speech and dissent, that we have come too far as a country in our democratic march, to allow or even permit the rollback of all the gains made in ensuring that the Ghanaian can hold his/her leaders to account.

Nothing they do will avert the scrutiny that they deserve and we at the Ghana Palaver pledge our unalloyed support for the Daily Post and its editor as well as all those in the media who have been set upon by this regime because they spoke their mind.

I Felt Very Safe Under Mahama – Manasseh
27 minutes ago