Eradication Of Poverty Only Possible By Fighting Inequalities 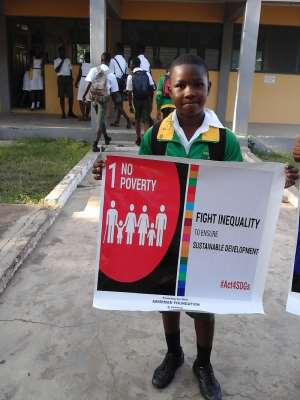 Today, on 17 October 2017 – the International Day of Eradication of Poverty - the Global Call to Action Against Poverty (GCAP) demands serious measures against inequalities in order to eradicate poverty by 2030.

The global community agreed to end poverty by 2030. We have the means to do this, if we create a more equal distribution. There is enough wealth. Only a small group of the super rich – the 1% richest and in many countries quite a few people - are grabbing the resources for themselves. This trend is even more extreme at the global level with a group of a few dozen men taking wealth away from the people through multinational corporations.

To do this they are using neoliberal policies since the 1970s, and, in the last years, more and more other political strategies to influence governments and media. Populist movements are often bankrolled by rich backers and used to create scapegoats and further right-wing policies and views. In addition, the space of civil society is shrinking in many countries.

As a result, social injustice is increasing and hunger is returning. In September this year, the UN Food and Agriculture Organisation (FAO) announced that after a steady decline in the number of people going hungry, it has increased again - 815 million people suffered from hunger in 2016, 38 million more than 2015!

The Agenda 2030 of the UN creates an opposite framework that aims to bring radical and transformational changes for people and the planet. On the Global Day of Action, 25 September 2017 – the two-year anniversary of the Agenda 2030, people organised and gathered in more than 1000 events in 116 countries and demanded action to achieve the Sustainable Development Goals (SDGs).

Marginalized people spoke for themselves on this Global Day of Action and are also raising their voices in many local and national struggles. To make sure that Leave No One Behind doesn’t become a slogan but reality, GCAP is continuing its bottom up campaign against inequalities.

The central element of the campaign is the “Faces of Inequality”, where people speak for themselves, including, for example, women with double or multiple discriminations. These women who have disabilities (over 600 million) or are ethnic minorities and Dalits (430 million) have powerful voices and are more and more organised. They need the political space – including in civil society.

Based on this work by GCAP’s coalitions at the local and national levels, we are demanding the following steps to eradicate poverty and fight inequalities:

That is why on 17 October we are raising our voices again to reiterate our commitment to a world with less inequalities and our determination to eliminate poverty by 2030.