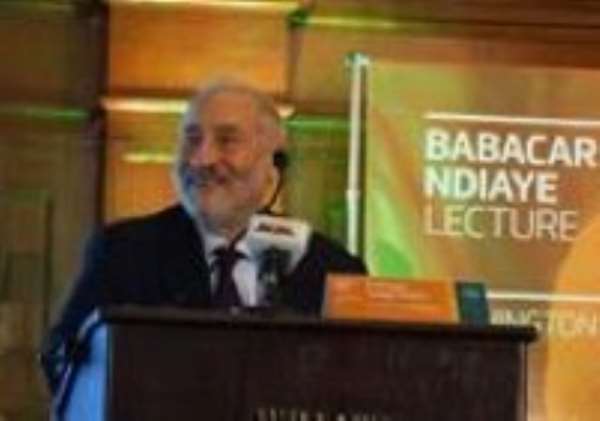 Afreximbank launched the Babacar Ndiaye Lecture series to honour the late Dr. Babacar Ndiaye, President of the African Development Bank (AfDB) from 1985 to 1995, for his many important contributions to Africa’s economic development, in particular, his critical role in the creation of Afreximbank. In addition to helping the AfDB to earn triple ‘A’ status, Dr. Ndiaye, who died in July 2017, was also behind the creation of several other continental institutions, including Shelter Afrique and the African Business Roundtable, and is credited with fostering the emergence of many young entrepreneurs who are helping to build Africa today.

In a wide-ranging presentation titled “From Manufacturing Led Export Growth to a 21st Century Inclusive Growth Strategy for Africa” at the Inaugural Babacar Ndiaye Lecture, Prof. Stiglitz, an economist and professor at Columbia University, New York, argued that while export-led growth was the basis of success of growth over the past half century, the factors that enabled manufacturing to provide that growth spurt would not be able to do so to the same extent in the future.

Another strategy that performed some of the essential roles that manufacturing export-led development did was, therefore, necessary, he said.

According to him, governments will need to play an important role in the new structural transformation towards a modern economy. That economy would not, in general, be a manufacturing economy but a modern services economy, he noted, saying that in the next phase of Africa’s development, modern agriculture would be vital.

Prof. Stiglitz highlighted the need for robust agricultural sector to provide full employment, including by stimulating manufacturing and services, and said that countries should seek to add learning dimension to agriculture and other sectors.

Modern agriculture can be very “advanced”, he noted, saying that there should be focus on non-labor saving innovations, including better crop mix and better fertilizers.

The focus on “learning” should emphasise developing skills that are useful in modern economy and there should be transformation of farming from traditional practices to modern farming.

Earlier, Dr. Benedict Oramah, President of Afreximbank, said that the Lecture Series was being launched to “recognize and immortalize the exceptional contributions of Dr Babacar Ndiaye to Africa and, indeed, mankind”.

“Dr Babacar Ndiaye was a visionary, consummate leader and a great institution builder who served the continent of Africa in an exemplary way throughout his well-documented and celebrated career,” said Dr. Oramah, who noted that he engineered a massive transformation of the AfDB and the financial landscape of the continent. He strategically used the AfDB’s platform and convening power to address some of the key constraints to economic development facing the African continent, emerging as a prodigious builder of development finance institutions across the continent.

Dr. Oramah extolled Dr. Ndiaye’s vision in championing the creation of Afreximbank and wondered what would have been the course of Africa today if the Bank had not been created.

“Which international bank would have been there to support the continent in the past two years of severe commodity crisis if Afreximbank was not there to disburse over $9 billion to certain banks and central banks?; which international bank would have ignored high compliance cost to be there for African economies that have lost correspondent banking relationships?; how would Africa today be dreaming of expanding intra-African trade and export manufacturing without an Afreximbank?,” he asked.

Dr. Oramah noted that since inception, Afreximbank had disbursed about $50 billion in support of African trade; attracted about $60 billion into strategic sectors of the African economy; expanded the continent’s industrial capacities through the financing of value addition across several industries, including cocoa, coffee, cotton and tea as well as a number of metals and minerals; and facilitated the development of critical trade and industrial infrastructure, among others.

In a goodwill message, Charles Boamah, Senior Vice President at the AfDB, commended Afreximbank for the initiative to honour Dr. Ndiaye said that the former AfDB President charted a clear path to Africa’s economic development.

The AfDB had also honoured Dr. Ndiaye by holding a special memorial event in his honour and by naming a major auditorium after him, added Mr. Boanah.

Also speaking, Dr. Donald Kaberuka, a former President of the AfDB, said that Dr. Ndiaye’s defining characteristics included his deep belief in Africa and a conviction that Africa could achieve development through trade and investment rather than through aid.

He rejected artificial divisions imposed on Africa, instead preferring to see the continent as one unit and believing that the Africa would develop best through continental integration, said Dr. Kaberuka.