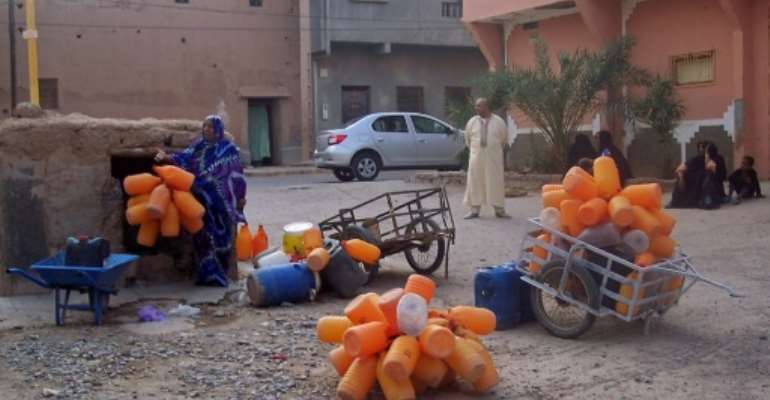 Residents of the southern Moroccan town of Zagora wait to fill containers with water from a public well as they face water shortages.. By STRINGER (AFP)

Rabat (AFP) - Residents angered by persistent water shortages in southern Morocco have taken to the streets in a series of "thirsty protests" that has grabbed the attention of the country's king.

Since the start of the summer, inhabitants in the region of desert town Zagora have been left parched and furious as water supplies are cut off for hours -- or even days -- at a time.

"The situation is critical. It means daily suffering for the people in this region," Jamal Akchbabe, head of an environmental group in the town, told AFP by phone.

"Families are going for days without tap water, while others don't have any for several hours each day. And this water is undrinkable."

In a bid to express their discontent over the crisis, residents began organising regular peaceful protests in the town of some 30,000, around 700 kilometres (430 miles) from the capital Rabat.

At first they were tolerated by the authorities, but then on September 24 security forces stepped in to break up a rally and arrested seven people for taking part in an "unauthorised demonstration", local rights activist Atmane Rizkou said.

The situation only got worse when residents tried again to march on October 8, activists said.

The attempt descended into violence as police boxed in the town and used force to break up the gathering and detained 21 people, said Akchbabe.

"The protesters were subjected to repression, insults and humiliation," he said.

"The town is in a state of siege."

Residents put the shortages roiling this arid region down to the overuse of sparse resources for agriculture, especially the cultivation of watermelons.

Akchbabe says locals accuse the ministry of agriculture of allowing this water-intensive production "which provides profit for big farmers to the detriment of the inhabitants".

University professor Abdelmalek Ihazrir, who has written about Morocco's water policy, says that rare rains have led to the overexploitation of ground water across the country.

"The rains are scarce and strong heatwaves lead to evaporation from water at the source, above all in the south," he told AFP.

"We need to develop a new, more rational policy and alternative measures."

Officials appear to have heeded the anger -- but so far their response has entailed mainly just words.

At the end of September Prime Minister Saad-Eddine El Othmani promised "emergency measures" after the national water and power authorities admitted there were "constraints" hindering the system.

A few days later the country's powerful monarch Mohammed VI called for the establishment of "a commission that will look at the issue with a view to finding an adequate solution in the coming months".

The protests come at a sensitive time for Morocco as the authorities are desperate to avoid a repeat of social unrest that has seen months of demonstrations rock the long-marginalised Rif region in the north.

But the water issues roiling the country are common across North Africa and the Middle East where access to the precious resource has long been a problem.

The World Bank estimates that over 60 percent of people there live in areas that suffer from a scarcity of water, compared to a worldwide figure of just 35 percent.

In neighbouring Algeria to the west, water shortages in 2000 and 2013 erupted into violence clashes.

Meanwhile in Tunisia, where residents are especially reliant on winter rainfall to fill up dams, droughts caused supplies to be cut in summer 2016 for periods that sometimes lasted weeks at a time.