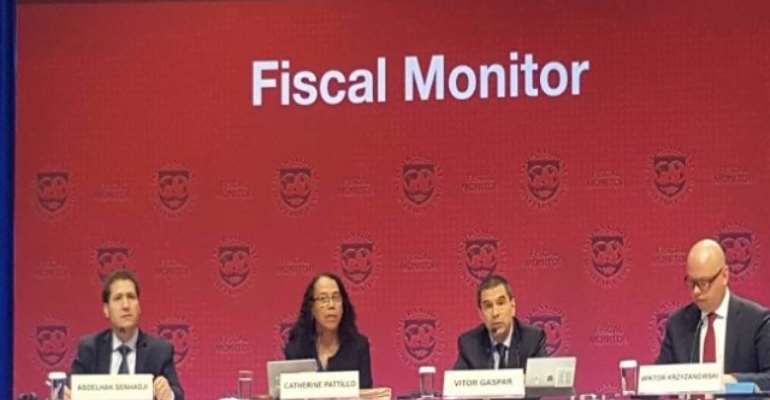 Ghana’s Debt-to-GDP ratio is expected to decrease significantly by the end of 2018 according to a projection captured in the fiscal monitor report released by the International Monetary Fund (IMF).

The data released on the sidelines of the Annual IMF/World Bank Meetings in Washington DC showed that the ratio of decrease is expected to hit 66.1 percent by the end of 2017.

What influenced these projections?
According to the IMF, their forecast is based on government implementing the current fiscal consolidation program which is aimed at reducing its rising expenditure and boosting revenue.

The fiscal monitor also revealed the ratio would be on the downward trajectory over the next four years, reaching 55 percent by 2022.

Concerns
There are always fears that when developing countries witnesses some significant reduction in their Debt-to–GDP ratio, there is the tendency for them to spend more.

But speaking to JOYBUSINESS after the launch of the report in Washington DC, Deputy Director at the Fiscal Affairs Department at the IMF, Catherine Pattillo said it is important that Ghana sticks to implementing the current fiscal plans to achieve these targets.

“Experience over the years have shown that often the plans are postponed, but our advice to Ghana is to stick to these programs, because delayed adjustment, would lead to more “unstained” debts,” she said.

She also added, “the debt numbers are declining and that comes from a combination of the fiscal consolidation which is part of government’s supported program and continued strong growth”.

“The Fund is supporting Ghana’s program, and it is working with the new government on fiscal consolidation and careful fiscal management in the next two years, that is 2017 and 2018 are really key to meeting these targets, and to reverse the debt dynamics,” she noted.

What are some independent actors saying about this development?

Speaking to JOYBUSINESS in Washington DC, Economics Professor Godfred Bokpin, said there is still a lot of work that needs to be done to sustain the expected decline in the Debt-to-GDP Ratio.

He was, however, of the view that government should look at the bigger picture in the debt sustainability analysis.

Prof Bokpin said this will put government on its toes so it would not be too excited by just the development to enable it to continue with programs that would keep the debt on a downward trajectory.

“If you look at it purely from the Debt–to-GDP Ratio, and its coming down, you may smile, but you also want to look at it in broader debt sustainability analysis, like the debt service to revenue ratio, Present Value of Debt –to-GDP-Ratio and Present value of debt to exports”

Why is the Debt-to-GDP Ratio a big deal?
The Debt-to-GDP-Ratio has been one of the key variables used by the World Bank and the IMF in assessing the health of a country’s finances.

It is believed that when it crosses the 70 percent mark, then that country is getting into an area where it may have some challenges in paying its debt on time.

This may make the country commit more revenue generated in settling debts rather than for infrastructure projects and meeting the needs of its citizens.

Ghana in its revised 2017 budget is setting aside ¢13. 2b billion for interest payments.