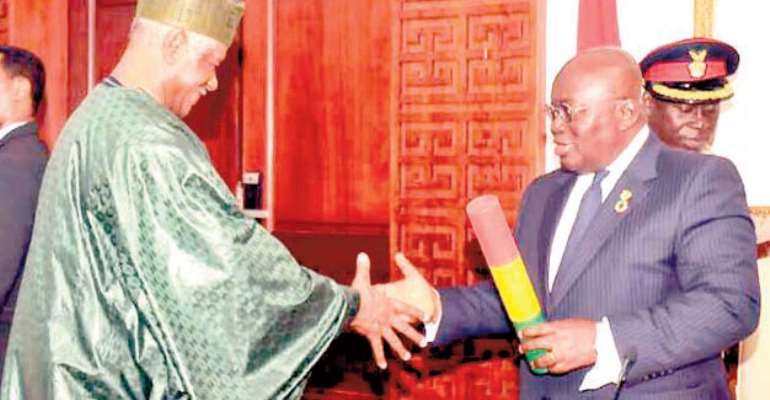 President Akufo-Addo's desire to work with even his political opponents was given a major impetus on Wednesday when he swore in an influential member of the People's National Convention (PNC), Ahmed Ramadan, as Ghana's envoy to the Kingdom of the United Arab Emirates (UAE).

The president stressed the belief that appointing an envoy for the first time to the oil rich country would help the nation develop and build a strong relation with that part of the world.

He therefore urged Mr Ahmed Ramadan, a veteran politician, to be diligent and foster stronger economic relation between Ghana and the UAE.

Ramadan, former National Chairman and leader of the PNC, is the father of Ghana's second lady, Samira Bawumia.

He shares the privilege of being appointed to serve in President Akufo-Addo's New Patriotic Party (NPP) government with one of his sons, Abu Ramadan, a former National Youth Organiser of the PNC, who has also been made a Deputy National Coordinator for the relief agency – National Disaster Management Organisation (NADMO).

Usually quiet and gentle Ramadan could not but thank the president, government and people of Ghana for the opportunity to represent their interest in the UAE, promising to pursue programmes and policies that would inure to the benefit of all Ghanaians.