Trade Fair Inaugurates Board Of Directors 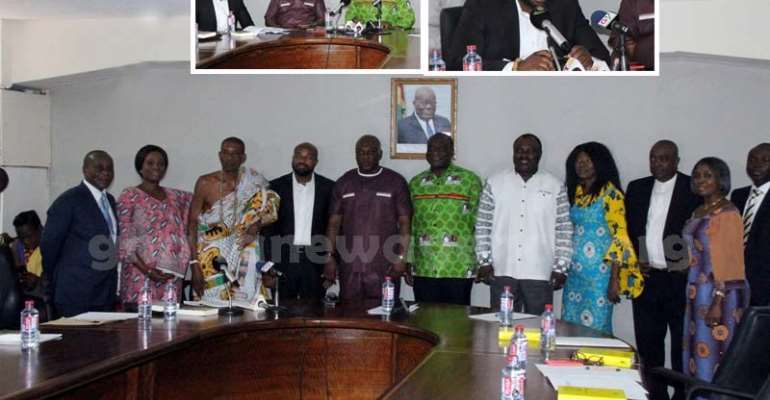 Alan Kyeremanten, the Minister of Trade and Industry, has inaugurated a nine-member board of Directors of the Ghana Trade Fair Company Limited in Accra.

The board is expected to enhance domestic retail trade and promote made-in-Ghana goods.

The rest are Mrs Ruth O.Q. Addison, Madam Fatimatu Abubakar, and Mr Hubert Sevor, all members of the board.

Mr. Kyeremanten said it was government's ambition to drive industrialization in the country, and urged the board to help strategize plans to achieve that agenda.

He said the government was working assiduously to transform the company into a world-class facility to incorporate a national conference centre and entertainment site among others, to put the country on the world map.

Mr. Kyeremanten challenged the board to help promote the country's products on the international market, and affirmed government's commitment to support the private sector to establish industrial enterprises across the districts.

“Government aims to decentralize industrialization and bring industries to the doorsteps of the citizenry, and that, this could be effective with the support from all and sundry” he added.

Mr. McKorley on behalf of the board members, thanked President Nana Akufo-Addo for the confidence reposed in them and pledged to revive the image of the company.

Meanwhile, the Trade Minister has also re-constituted a 12- member task force of the Ministry to deal with smuggled pirated goods coming into the country.

He urged the task-force to perform their duty without fear or favour, to improve local production.

Mr. Mohamadu thanked President Akufo-Addo for the opportunity, and assured the government of their commitment to perform their mandate in an efficient manner.

They Sent 'Dante Crocodiles' To Our Area To Scarce Us — Ajum...
38 minutes ago

VIDEO: May Ken Agyapong Suffer From Paralysis And Be Numbed ...
57 minutes ago