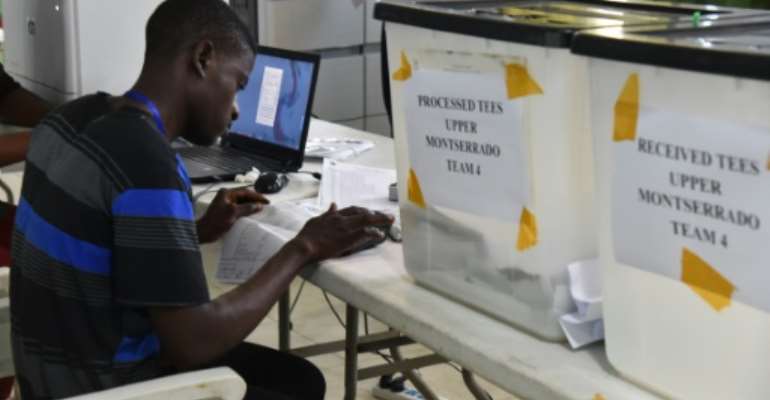 The results of Liberia's presidential elections have been delayed after hiccups on polling day, which included long queues at ballot stations and misdirections to voters. The election is a vital barometer of the country's stability. By ISSOUF SANOGO (AFP)

Monrovia (AFP) - Liberia on Thursday awaited the delayed announcement of the outcome of presidential elections as international observers called for the results to be released promptly to avoid stoking tension.

Political parties have expressed concern over polling-day hitches on Tuesday, with one calling for a halt to the ballot count.

Footballing superstar George Weah and incumbent Vice-President Joseph Boakai are expected to top the first round of voting, according to analysts, though former Coca-Cola executive Alexander Cummings is considered to have eaten into their support with an innovative campaign strategy.

If no candidate wins 50 percent of the presidential vote, a run-off between the top two contenders will be held on November 7 -- an outcome deemed a near certainty.

The chairman of the Liberty Party, whose candidate Charles Brumskine is also seen as a serious contender, on Thursday urged the "NEC to immediately halt further announcements of election results."

In a statement sent to AFP, he claimed the irregularities were "deeply troubling".

"If NEC does not cooperate with our request, we will take the appropriate legal action," the party's chairman, Ben Sanvee, said.

The National Elections Commission (NEC) is expected will hold a press conference at 5pm (1700 GMT) with the first official results.

Turnout for Liberia's first democratic transfer of power in seven decades was exceptionally high, the NEC has suggested.

Given the delays, the European Union observer mission urged the NEC to be as open to possible about the details of the final results.

"In order for the final result to be credible the Liberian authorities will have to show the greatest transparency regarding the handling of the result for the polling stations until the validation," the chief observer of the EU's Election Observation Mission, Maria Arena, told journalists in Monrovia.

She also called on the authorities to ensure that "potential complaints are handled with the utmost impartiality" in a tense environment.

The Carter Center, an NGO founded by former US president Jimmy Carter, said "prompt release of results" would help in "building confidence among the electorate and preventing confusion and tension."