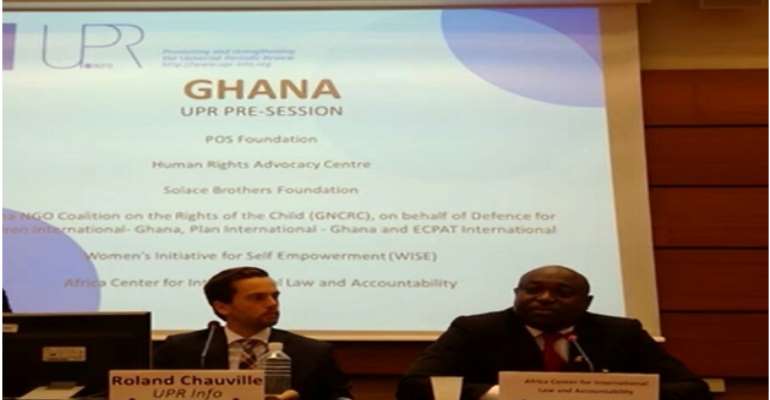 Research and education think tank Africa Center for International Law and Accountability (ACILA) has urged diplomats at the United Nations in Geneva, Switzerland, to make recommendations to Ghana to ratify and domesticate international instruments to which it is a signatory when Ghana appears before the United Nations Human Rights Council next month for a review of its human rights record.

ACILA executive director, Mr. William Nyarko, who made the call to the diplomats during a presentation to the UN Permanent Missions on Tuesday, noted that even though Ghana had made commendable progress in implementing some of the recommendations that the diplomats had made in 2012, a lot remains to be done by Ghana to ensure compliance with its obligations under international law.

Mr. Nyarko’s call to the diplomats comes barely one month before diplomats on the United Nations Human Rights Council will review Ghana’s human rights record in Geneva on November 7, 2017 under the UN Universal Periodic Review mechanism. Under the UPR, the human rights record of all the 193 Member States of the UN is reviewed every five years.

The Human Rights Council is an inter-governmental body within the United Nations system made up of 47 States responsible for the promotion and protection of all human rights around the globe, according to the UN Office of the High Commissioner of Human Rights.

Continuing, Mr. Nyarko explained that at the 2012 UPR cycle, Hungary and Tunisia made a recommendation to Ghana, which Ghana accepted, to domesticate the Rome Statute, which Ghana had ratified as far back as 1999.

In April 2016, Ghana drafted the International Criminal Court Bill but the bill has since not been laid before Parliament for deliberation, passage, and signing into law. This state of affairs is attributable to lack of political will and lack of public demand for responsiveness and accountability from the state, he noted.

He urged the diplomats to recommend to Ghana to pass and sign the International Criminal Court Bill into law before the end of 2018 in order to establish a legal framework to enable Ghanaian courts to try offences committed under the Rome Statute as well as enable the ICC to prosecute cases in Ghana where Ghanaian courts are unable to do so.

Touching on the signing and ratification of instruments, Mr. Nyarko recalled that at the 2012 UPR, about 20 recommendations were made to Ghana to, among other things, “ratify before the end of the third UPR cycle those conventions to which Ghana is a signatory (Hungary)”; ratify OP-CAT (Luxembourg, Australia, Tunisia, Czech Republic, Estonia, Spain);“ratify the Second Optional Protocol to the International Covenant on Civil and Political Rights, aiming at the abolition of the death penalty (Australia, Spain, Rwanda, Switzerland, France, Uruguay, Norway).

He said while Ghana had made some progress by ratifying one of the core human rights instruments, that is, the Optional Protocol to the Convention Against Torture (OP-CAT) on September 23, 2016, majority of the instruments have still not been ratified or remain unsigned.

In the case of signing and ratifying the Second Optional Protocol to the International Covenant on Civil and Political Rights, aiming at the abolition

According to Mr. Nyarko, this recommendation was to be put to a national referendum because the death penalty is an entrenched provision in the Constitution; however, the referendum has not been held.

He encouraged the diplomats to recommend to Ghana to ratify the international instruments to which Ghana is a signatory by December 2018 and put the recommendations of the CRC to a referendum by January 2020 to inform Ghana’s decision whether to sign and ratify ICCPR-OP2.

“In the meantime, Ghana should continue to commute death sentences to life imprisonment”, he added.