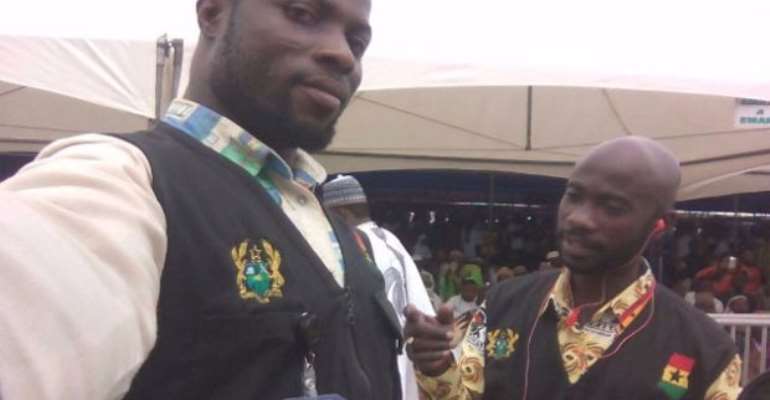 The mortal remains of Net 2 Television cameraman, who lost his life in the Atomic Junction gas explosion last Saturday evening, was laid to rest yesterday.

Mohammed Ashiley, 37 – the station’s videographer attached to the presidency – met his untimely death whilst filming the gas explosion which claimed seven lives, leaving 132 others with various degrees of injury.

His body was discovered Monday morning after two days of intensive search at the various health facilities in Accra.

Management and staff of Kencity Media, owners of Net 2 TV and Oman Fm, informed the president of Mohammed's death later in the day.

It was all tears when staff of the station, led by the owner and Member of Parliament (MP) for Assin Central, Kennedy Ohene Agyapong and wife Stella – who is the Chief Executive Officer (CEO) of the company – members of the presidential press corps and a government delegation led by Chief of Staff, Frema Osei Opare, stormed Danchira, near Amasaman, (Mohammed's hometown) yesterday for the burial ceremony.

Colleagues and family members broke down in tears, as the mortal remains were being lowered into the grave for eternal rest.

The actual funeral is set to be performed in 40 days' time, according to Islamic tradition.

Ken Agyapong Breaks Down
Mr Agyapong had been explaining the circumstances leading to the unfortunate death of Mohammed Ashiley Yakubu.

He said yesterday that events following the explosion last Saturday evening showed that the cameraman, who was attached to the presidency, was 'destined' to die.

The tough–talking MP became sober and almost broke down in tears on live television when he started narrating what actually led to the untimely death of Mohammed.

Kencity Directive
He said immediately news broke that there was a huge explosion at Atomic Junction, Accra – which is quite close to the Kencity building housing the television and the radio stations at Madina Zingo Junction – the management directed all the staff who were present not to go out until things normalised.

“They were even warned not to put on the generator but he decided to go to the scene to take footages and died in the process,” Mr Agyapong revealed.

Daring Move
However, Mohammed, believed to be 35 years old, was said to have left the Net2 premises without his backpack and phones and rushed to the fire scene to do his job.

Reports say he fell from the overpass at Atomic Junction, as he tried to capture the scene and his body was later identified at the Police Hospital morgue about 48 hours after the deadly explosion.

“Honestly from the angle that it's coming, I don't know whether destiny is the same as an act of God, because I learnt that they were cautioned not to move out and stay calm but because of the love for his job, he went out to work, which makes me think that he was destined to die that night,” Mr. Agyapong said on Adom TV.

According to him, “Mohammed was a man of great intellect and courage who will risk his life in the line of duty.”

He also said the springing up of fuel and gas stations, especially in residential areas in Accra in particular, demonstrates a clear case of systems and institutional failure and called for punitive action against the culprits.

“It is sad that we lose some of our people in the line of duty. We need to set the record straight that Ghana has not been enveloped in media safety crisis, even though these are isolated cases. The frequency with which they occur should sound alarm bells, and so, we are overly concerned and very worried about such incidences.”