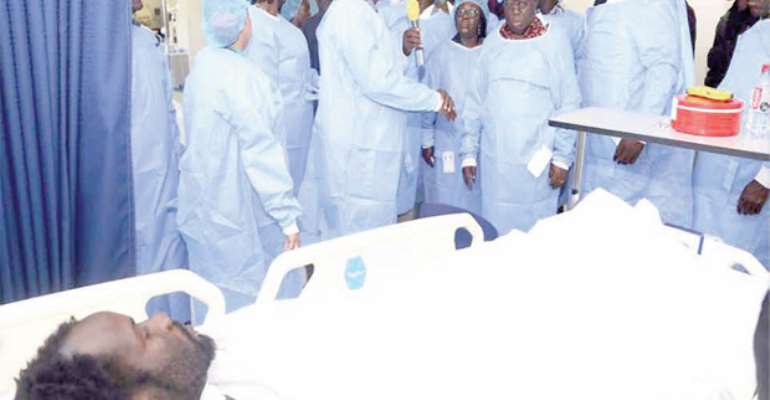 Details are emerging about how the deadly gas explosion at Atomic Junction, Madina in Accra, started.

The explosion that created huge fireballs in the sky in the north-eastern part of Accra at about 7:30 pm on Saturday, has greatly shocked the nation and also brought to the fore the need to tighten regulations on how petroleum products and the operations of petrol and gas stations are managed.

The actual cause of the explosion has not been confirmed, but the Ghana National Fire Service (GNFS) appears to have deflated the khebab-induced theory espoused by some journalists and social commentators as having started the huge fire.

There was no sign that the khebab man operated at that fateful hour when the explosion occurred, as his grilling stove was covered.

Casualty Figure
Officially, seven people – including a cameraman working with NET2 Television in Accra, who was stationed at the Flagstaff House, Mohammed Ashiley – are reported dead while 132 others were said to have been injured, with 64 of them having been treated and discharged by Sunday.

Mohammed Ashiley died in the line of duty while covering the event for the TV station, which is not too far from the accident scene.

He said the actual cause of the explosion was still under investigation and described the khebab link as 'unfortunate.'

Already, countless number of witnesses had confirmed that the scent of gas was all over the area where a tanker was discharging the highly inflammable product; and that was an indication that the atmosphere was smoldered moments before the explosion, which was felt as far as Adentan and its environs.

There are reports that the driver of the gas tanker realized that the tank containing the gas was leaking and blew an alarm, forcing everybody at the scene, including workers in the area, to run helter-skelter.

Hundreds of people in and around the Atomic Junction area fled their homes and workplaces for safety as the two explosions lit the skies and caused severe heat waves.

Reports were rife on social media that the said khebab seller, who lit a fire when the gas was being offloaded, might have caused the explosion and the version espoused by a Joy FM journalist that the fire was started by a khebab seller went viral.

“It is true that certain activities around the gas filling station might be responsible for the cause of a gas fire on the gas facility, but if you are talking about a khebab seller, you need to determine the distance of the khebab seller to the gas filling point,” Mr. Anaglate told Citi FM in Accra.

Manual Valves
In the ensuing debate, the Chamber of Petroleum Consumers claimed that the use of 'manual valves' in discharging liquefied petroleum gas from a tanker into a storage tank might be the possible cause of the unfortunate disaster.

It said in a statement that its findings into the possible cause of the explosions pointed to the absence of a proper dislodge device (suction pumps) at the station.

A gas leak from one of the two gas fuel stations within the Atomic Junction enclave reportedly sparked fire, which extended to an adjoining Total filling station, causing two explosions that sent fireballs into the skies.

UPSA Protests
Students of the University of Professional Studies, Accra (UPSA), which is in the same enclave where the gas exploded, have started agitating for the removal of a petrol station under construction, situated right behind the campus which they claimed was a threat to their lives.

In a statement signed by UPSA SRC president, Justice Gadugah, the students said they wanted the regulatory authorities to act without delay to stop the construction of the fuel station.

“Due to the high number of casualties recorded by some students of UPSA, the executive council of the Students' Representative Council (SRC) would like to by this notice inform the students of the University of Professional Studies, Accra to declare a demonstration tomorrow, Monday, 9th October, 2017,” the statement said.

The explosion had forced some students of the University of Ghana, Legon out of their hostels with over 200 of them wounded in the confusion.

PRESEC Boys
Students of Presbyterian Boys Senior High School – which is situated quite close to the accident scene – had to run for their lives when the fireballs started flying.

Almost every student took to his heels and some of them were found as far as Accra Mall area on the Tetteh Quarshie Interchange.

Yesterday, a Deputy Minister of Education, Dr. Yaw Osei Adutwum, visited the campus and interacted with the students and gave the assurance that the Ghana Education Service (GES) was bringing in counselors to manage the traumatized students.

Police Presence
At least 200 police officers, led by COP Akuffo Dampare, as well as all the security agencies and allied institutions like the GNFS and NADMO, have been deployed to the scene since Saturday.

Dr. Dampare said yesterday that it was too early for anybody to disclose the actual cause of the fire, but added that the police administration would continue to be vigilant.

Emergency Response
The emergency response appears to be swift as indicated by a Deputy Information Minister, Kojo Oppong Nkrumah, who commended the GNFS, NADMO, Ghana Ambulance Service and the security agencies for the manner in which they dealt with the situation.

He described the swift response as unprecedented and said the government was committed to ensuring that all emergency service providers were given adequate resources to operate.

The deputy minister later revealed that about 400 gas stations are currently operating in residential areas across the country.