About 400 Gas Stations Identified To Be Sitting Within Residential Areas 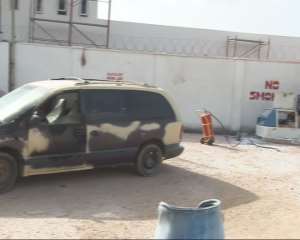 A Deputy Ministry of Information, Kojo Oppong Nkrumah, has said about 400 gas stations are located in residential areas across the country.

He made the revelations following the Atomic Junction gas explosion, which occurred on Saturday night.

Seven persons have been confirmed dead, while 132 sustained various degrees of injuries in the multiple explosions that started from the Mansco Gas Station and extended to the adjacent Total Filling Station.

Sixty-four of the injured persons were treated and discharged, while 68 are still receiving medical treatment in six different health facilities.

Some of the health facilities treating victims of the explosion are the Pentecost Hospital in Madina, the 37 Military Hospital, the Ridge Hospital and the Police Hospital.

The venue of the disaster has been cordoned off by security agencies, while investigations are ongoing to establish the cause of the explosion.

Officials of the National Disaster Management Organisation, the Ghana National Fire Service, the Ghana Police Service and other security agencies have set up post at the place to prevent intruders.

Saturday's disaster is the eighth in three years and has renewed calls for strict regulations to bar the siting of fuel stations close to residential areas.

Meanwhile, the President has said that the government would soon come out with a policy intervention to address the frequent gas explosions.â€‹

Some members of the public the Ghana News Agency interacted with on Sunday were unanimous in their call for the government to be serious with the matter and resolve the phenomenon once and for all.

Kwasi Eshun, who lives close to a gas filling station at Gbawe in the Ga South Municipality of the Greater Accra Region, expressed fear about his safety and that of his family in view of the frequent gas explosions.

He suggested that gas filling stations be taken away from residential areas, while the National Petroleum Authority and Environmental Protection Agency undertook constant monitoring to check safety standards of those facilities to forestall future occurrence.

Ghana has recorded eight major explosions in three years, from 2014.

Six of them occurred in the Greater Accra Region, while the Western and Central regions recorded one each.