Chiefs To Offer Sacrifices To Thank The gods For ITLOS Victory 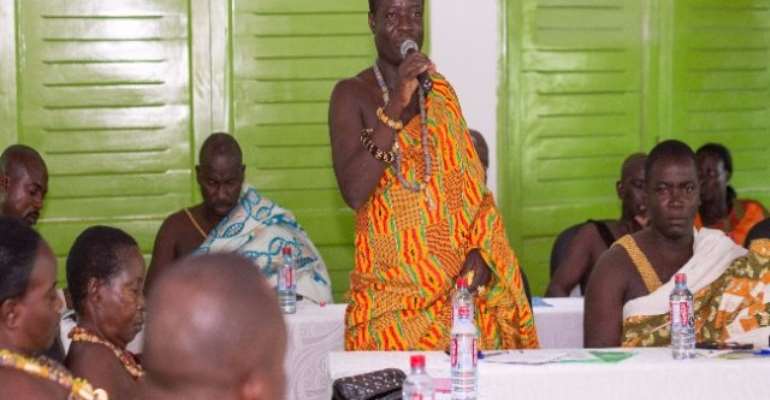 Chiefs in the Western region have hailed the aftermath of the International Tribunal of the Law of the Sea (I TLOS) ruling which gives Tullow Ghana Limited the go-ahead to activate its plans to drill more wells to improve production in the TEN fields.

Paramount Chief of Nsein Traditional Area, Awulae Agyevi Kwame II, informed a meeting with the Paramount Chiefs in the Region that a day will be set aside to commemorate the victory.

He said they will pour libation and offer sacrifices to the gods and ancestors for supporting Ghana to come out victorious.

Awulae Agyevi Kwame II was speaking at engagement with the traditional authorities under the auspices of Tullow Ghana Limited (TGL).

In September 2014, Ghana hauled Cote d’Ivoire to the special chamber of the ITLOS after negotiations with the French neighbour over a maritime dispute concerning the West Cape Three Points broke down.

In its initial ruling in 2015, the Chamber placed a moratorium on new projects, compelling Tullow Ghana Limited to put on hold operations including drilling in the disputed area.

The knock effect will be the access to the oil resource and more funds for the country.

The Senior Social Performance and Public Affairs Advisor, Fiifi Enchill, thanked the traditional authorities for their continuous support to TGL’s operations and for once again accepting their invitation.

He indicated that the guidance, direction and support of the Traditional Authorities have played a key role in the success of the company which looks forward to enjoying such cordial relationship and mutual co-existence.

TGL expressed its commitment to remaining engaged and informed in accordance with its value of shared prosperity for the people in its operational area of the Western Region and maintaining the company’s social license.

Present at the event were chiefs of Eastern Nzema, Ajomoro, Nsein and Lower Axim traditional areas.