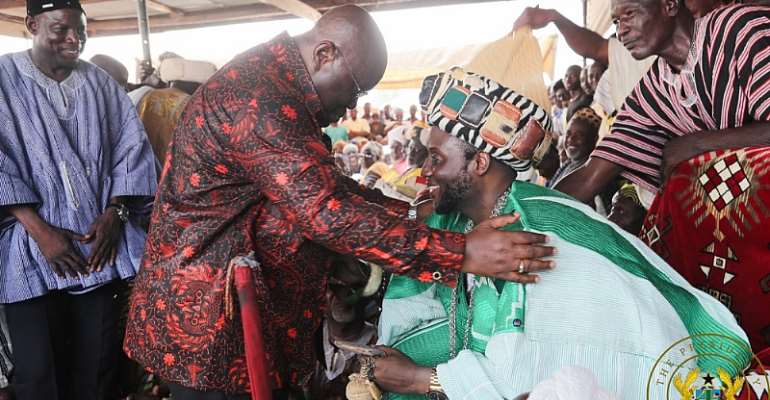 The President of the Republic, Nana Addo Dankwa Akufo-Addo, says the best Christmas gift he can give the people of Yendi and Ghana, this year, will be the enskinment of a new Ya Naa, ahead of the celebration of the Damba Festival.

This, according to President Akufo-Addo, will be the “crowning achievement of my first year as President of the Republic”, adding that “I am going to do everything that a President can do to make sure that we get there.”

President Akufo-Addo made this known on Saturday, 7th October, 2017, when he paid separate courtesy calls on the Regent of Dagbon, the Kampakuya Naa, Yakubu Abdulai Andani; and the Bolin Lana, Mahamadu Abdulai, at Yendi, on day 2 of his 3-day tour of the Northern Region.

Addressing the issue of the 15-year long impasse in Dagbon, the President noted that the issue at play is “how to apply the customs of Dagbon, with the relevant compromises, to resolve the issue.”

It is for this reason, President Akufo-Addo recounted the role played by the former President of the Republic, “the wise statesman”, His Excellency John Agyekum Kufuor, in setting up the Committee of Eminent Chiefs, who are “responsible for fashioning out an acceptable formula for the resolution of the crisis.”

The Eminent Chiefs selected by former President Kufuor, in the view of President Akufo-Addo, “are amongst the greatest Chiefs in our country”.

They are the overlord of Mamprugu, the Nayiri, Naa Bohagu Abdulai Mahami Sheriga; the overlord of Gonjaland, the Yagbonwura, Tuntumba Boresa I; and the Chairman of the Committee, who, according to President Akufo-Addo, has been doing a yeoman’s job, and is no less a person than the Asantehene, Otumfuo Osei Tutu II.

“Whatever formula, whatever understanding they come to, amongst the parties to the Dagbon conflict, will have the full, unequivocal support of my government. I want to reassure you that I don’t have an interest in the outcome of the accommodation,” the President said.

To the Kampakuya Naa, President Akufo-Addo assured that “any officials of mine who are seen to be impeding the resolution of the matter, according to custom, will have me to play with.”

He assured further, in response to a request made by the Imam, who offered the opening prayer at the Kampakuya Naa’s palace, that “the Regent has nothing to fear from me. He will be very well looked after in the process. His father was my friend, and it will not be right that I do not treat his son right. He [the late Ya Naa] will not forgive me.”

By the same token, President Akufo-Addo pleaded with the Andanis and Abudus to accommodate whatever missteps that occur, in the process to find a lasting solution to the problem, stressing that “if we are committed to the end of the journey, and there are missteps along the way, we should find a way to accommodate it, so that we do not jeopardize it.”

The President, thus, appealed to all involved in the Dagbon matter to “work together, and ensure the necessary accommodation and compromises to bring this 15 year old crisis to a conclusion. The people of Ghana will see Dagbon for what it is – a historic state of our nation – and we want to see it rise again.”

Yendi Water Treatment Plant
With the Yendi water supply system seeing no upgrades since 1973, President Akufo-Addo stated that “I am happy to inform you that my government has secured a credit facility of $30 million from the EXIM Bank of India to be able to establish a Water Treatment Plant from the Oti River, to supply Yendi and all the surrounding towns.”

He indicated that the beginning of the next quarter of 2018 will witness the completion of the requisite paper work, and the commencement of the project.

“In the same way the strengthening of the National Health Insurance Scheme (NHIS) also requires that we expand and strengthen the infrastructure of our healthcare delivery system.

The message you (Kampakuya Naa) have given me, on the need to expand and strengthen the Yendi hospital, that message, I am taking it straight with me to Accra to the Minister for Health,” President Akufo-Addo added.