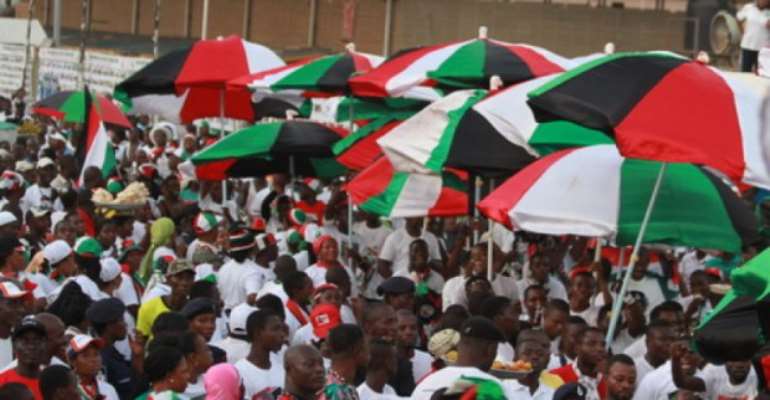 Democracy requires not only popular participation, but also popular competition. We must also understand democracy is not only a regime in which those who govern are selected through contested elections, but more fundamentally a system of government in which parties lose elections. We heard so many attacks and insults after the 2016 elections from some supporters of the opposition NDC who attributed their party's defeat to actions and inactions of their officials. The truth is that however bitter we may feel, the democratic system works best when there is a change of government at reasonable intervals that is why Benjamin Disraeli's dictum that 'no government can long be secure without a formidable opposition' has proved true and fully valid for the healthy and efficiency of a democracy.

The insults and primitive dispositions will not bring back the opposition they will rather complicate the already bad situation. Vigilant and principled opposition is indispensable at this point. For a party that transformed the country in terms of infrastructure, placed the economy on solid foundation and a party that has been steering the statecraft since the beginning of the fourth republic, being in the opposition because of oversized lies told Ghanaians by the Npp will not be an task.

But listening to complaints emanating from the various stables of the party, attitude of some persons party supporters and the former administration reposed confidence in, attitude of some former appointees and some communicators on radio after the defeat, I believe that the defeat is a crucial opportunity for the NDC to put its house in order. But to build a formidable base for the task ahead, there are certain important steps the party should take. In opposition, some of the members including past officers may start dealing clandestinely with the party in power and some may even defect.

We shall continue to see this unfaithfulness and climate of political infidelity because our politics are not built on sound ideological underpinnings though we make loud ideological noise on our platforms. Selfish and groups interest always supersede ideological interest. By elite consensus, political power in Ghana is seen as an avenue to access state resources and no wants to lose out in the power struggle. This attitude is eating deeply into our internal politics.

The result is that selfish and greedy politicians often align themselves with whichever party is in power.That is what Mahatma Gandhi calls 'politics without principle'. Opposition should be a chance to bring fresh ideas , hear critical voices and build up relationships. This is the reason why party faithfuls must vehemently reject those who think some set of old ethos can bring the party back to power and others who think more about occupying positions in the party than building consensus to smoothen the party's movement.

It is time to throw the rascals out. Remember what Sammy Awuku said in opposition that; they will package lies and throw them out vigorously same way the NDC setting the record team did between 2007-2008.

In opposition, communicators have unlimited space to throw out whatever news they think can work for their agenda and they do that fearlessly because they are not accountable to anybody. To measure communicators of the incumbent by what you hear and see the opposition elements say or do is wrong. I monitored an npp rally at Ofankor few days after the sitting President then Barima Mahama inaugurated the Ofankor Ayalolo bus terminal addressed by Sammy Awuku and beloved, I left the place shattered. The young man exhibited extraordinary propaganda skills and released piercing punches which I knew touched emotions. And you know why he spoke at such places and on radio with confidence? It was because was not being haunted by tormenting shadows. Most of people who speak for the party on radio appear weakened by their past associations with the past regime vis-à-vis the ongoing witch hunting operations. They easily get intimidated by government communicators and are afraid to speak vehemently against nefarious activities of the administration. Such persons should step aside for new faces to take over.

The second point is the party staying together as one strong opposition. The party must go back to the drawing board, honestly assess its performance in government and identify its areas of comparative strength and weaknesses. If this is done devoid of blocks interests it will help the party unravel the factors responsible for its poor outing in the 2016 election. This can start from the branches. Most of the executives are going through serious psychological crisis because of the attacks they received from the rank and file after the defeat and because of that, have lost their authority which is dangerous.

The third point is formulation of ideas in opposition. Opposition politics is about ideas, policies and strategies for changing power. Opposition is not just about opposing and criticising, but getting elected. All the jabs on social media, the press conferences, the pictures etc mean nothing without getting into government. This is what those fighting for internal space and those engaged in the primitive blocks formation agenda must know. Under a dictator, being an official of an opposition party is as useless as the word. It is in this light, the NDC will have to assemble a team of experts in different aspects of governance, politics, economics, science, education, health, transport, and business including persons who ideologically are linked to the NDC in that will drive its campaign of ideas. Interest groups , think tanks and consultancies can provide a very valuable resource. They work of these experts many of them who will work from independent disposition, will be identify the failures and loopholes in the policy framework of the ruling party and to propose new ideas for the change the party want to effect. Not to repeat the mistakes that placed the party in opposition, these expert must expand their work to future cost and outcomes of the new policies.

The fourth point it the party's resources. In opposition resources seem scarce because the NDC in opposition does not control the instruments of coercion and the resources of the state. The resources available must be used wisely to avoid over dependence on external support from business magnates and foreign entities which can affect the party when it gets into government. The issue of its relationship with the media and resources to deal with the media is also important. Media management is very crucial to the 2020 dream and opposition politics in general.

Whoever emerges as head of the Party's communication outfit has an enormous task on his shoulders. The person and his deputies must first kill the divisions in the communication outfit. This phenomenon of blocks communication must end with the coming into office of the new team. The party must select well informed communicators, people who will not government communicators and hosts to intimidate them to speak for the party. History provides many examples of communicators who have caused irredeemable havoc to their parties because of utterances that they later come to regret. In opposition politics everyone cannot and should not be allowed to speak on behalf of the party. The race for 2020 has already began, and the determining factor in what direction the political wind sways will be the quality of opposition politics the NDC is going to bring to the table of political participation.

The party must start fishing for its forces in the academia, the lawyers, the accountants etc and must treat them as part of the system not as outsiders. The NDC is a social democratic political organisation not conservatives whose elitism philosophy support the originals and outsiders phenomenon.

My last point is the 'early cracks' and its effect on our communication. The NDC has three years ahead and that must already ring loud in the ears of party supporters and those aspiring to lead the party. The Npp's failure is not an automatic guarantee the NDC's 2020 victory. Corruption in our contemporary times has become the most potent missile the opposition can use to oust the incumbent, or incumbent, to keep the opposition in the political desert hence the need to always stand up as a unit against attempts to denigrate the former administration with baseless corruption.