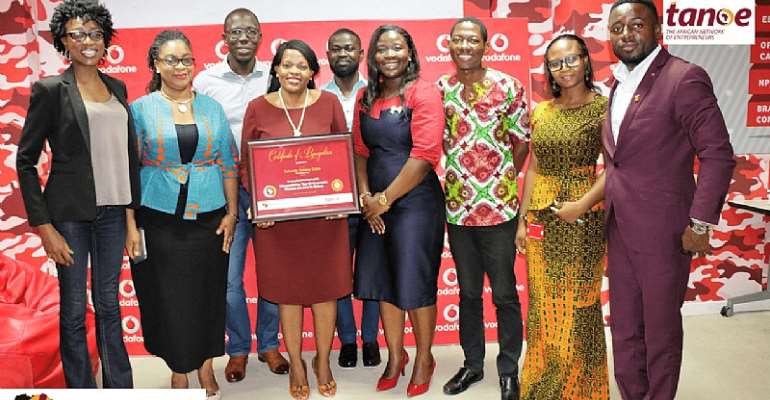 Vodafone Ghana CEO, Yolanda Zoleka Cuba has been presented with an award, recognizing her among WomanRising’s 2016 Top 50 Corporate Women Leaders in Ghana.

The ranking which featured 50 of Ghana’s leading corporate women leaders in both public and private sector was held in 2016 to recognize the contribution of professional women in the development of Ghana’s economy and job creation.

The ceremony which took place at Vodafone Ghana’s headoffice with her management team members present, Yolanda Zoleka Cuba was presented her award by the COO of The African Network of Entrepreneurs (TANOE), Alice Larkai and head of Research, Prince Akpah.

WomanRising on the 19th of October will be hosting of the Women CEOs Summit at the Movenpick Hotel. The event will kick off at 10am with a business fair and exhibition and conference at 2pm. Registration is currently ongoing on womenceosummit.womanrising.org

WomanRising is a network under The African Network of Entrepreneurs (TANOE) that focuses on women entrepreneurs and professionals in the consistent development and advancement of women, especially in Africa.