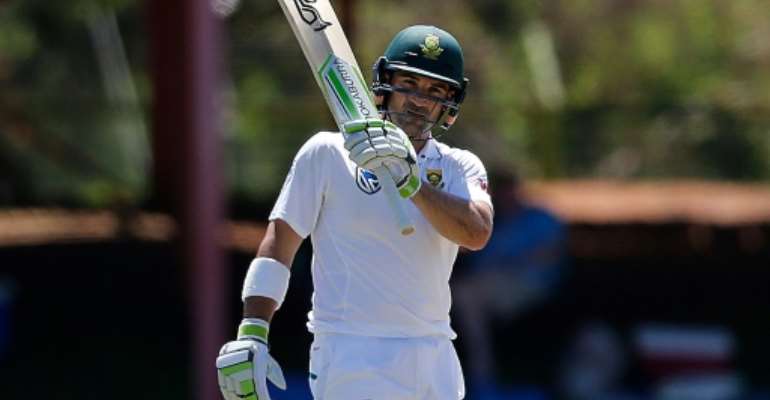 South African batsman Dean Elgar celebrates after scoring a half-century against Bangladesh during the first day of the second Test match in Bloemfontein, on October 6, 2017. By Marco Longari (AFP/File)

Bloemfontein (South Africa) (AFP) - Dean Elgar struck a fluent half-century as South Africa made another good start on the first day of the second and final Test against Bangladesh at Mangaung Oval on Friday.

South Africa were 126 for no wicket at lunch with Elgar on 72 not out and his opening partner Aiden Markram on 54.

It was a familiar tale for Bangladesh after their captain, Mushfiqur Rahim, won the toss and chose to bowl, as they had done in the first Test in Potchefstroom.

On that occasion Elgar and Markram put on 196 for the first wicket, setting up a 333-run win for South Africa.

Bangladesh made three changes to their bowling line-up, with Subashis Roy, Rubel Hossain and left-arm spinner Taijul Islam coming into the side, with only Mustafizur Rahman of their front-line bowlers retained.

As predicted there was more pace and bounce than in Potchefstroom but although there was good carry for the fast bowlers, it also encouraged stroke play from the batsmen.

Fifteen runs came off Roy's second over, the fourth of the match, and Rahim made a double bowling change, with Mustafizur switching ends.

The left-handed Elgar, with a reputation for solid accumulation rather than flashy strokes, hurried to his half-century off 59 balls. At lunch, he had faced 88 deliveries and added three more boundaries.

Markram was more subdued at the start of the innings but reached his second fifty in his second Test off 81 balls, with eight fours.