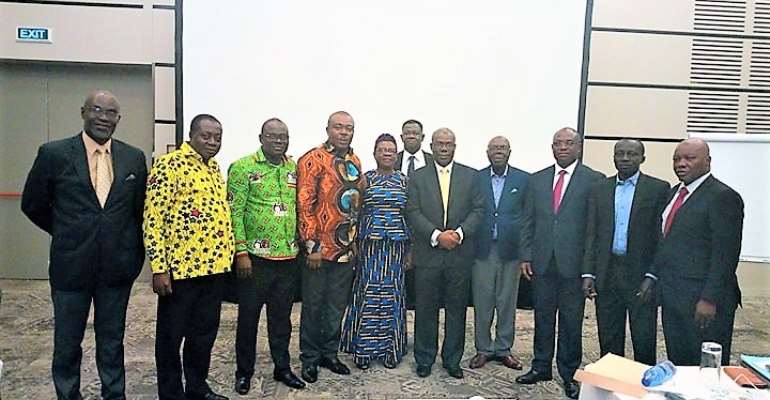 As part of series of ongoing training programmes for Board Members of State-Owned Enterprises, under the auspices of Hon. Asamoah-Boateng-led State Enterprises Commission, a latest session was held on Monday, 2nd October, 2017, for the combined team of Members of Ghana Ports&Habours Authority [GPHA], Ghana Maritime Authority [GMA] and Ghana Standards Authority [GSA]. The programme was held at the Labadi Hotel and facilitated by Ishmael Yamson&Associates.

The Board of any Business Entity, is more or less the heart-beat or engine-room where its very survival is determined, vis-à-vis decision-making. The Board-Room is where critical decisions which either makes or breaks the entity are taken. Such decisions are then passed on to the CEO who then passes it on to the Management for further dissection and ultimate decisions to be taken.

With this chain of Corporate Governance structure, it is imperative to have the knowledge, skill, drive and integrity of Members of the Board being top-notched. But with situations where these entities are engaged in specialized fields of operations that might be somehow new experience to the incoming Board Members, the training programmes instituted by State Enterprises Commission have proven extremely vital.

At the latest programme for Board Members of above-listed SOEs, Dr. Ishmael Yamson of Ishmael Yamson&Associates took the participants through various departments of Corporate Governance including RISK MANAGEMENT, FINANCIAL REPORTING and ESSENCE OF PERSONAL INTEGRITY.

Risk Management
Dr. Yamson admonished the participants to be “ruthless with the Executive based on truth”. He advised them “not to stick by a CEO just because he/she is appointed by the President”. “You must be frank with the President if a CEO appointed by him is not performing so that immediate remedy steps can be taken”, Dr. Yamson stressed.

These admonitions to the Board Members is because instead of they playing oversight role of their respective SOEs,the practice has often been that, they inadvertently capitulate in the face of CEOs,under the thinking that he/she has the “President’s ear and therefore much powerful”. Dr. Yamson cited an example where in one of these SOEs, “a huge end of year party for making profits, but within a matter of six[6] months later, this Entity was declared totally bankrupt”. He said such a scenario occurred because the Board “failed to play its critical oversight role, and therefore, things were being done without recourse to proper scrutiny”.

Financial Reporting
Dr. Ishmael Yamson stated that “The scenarios where new CEOs are signing accounts prepared under the stewardship of their predecessors, are happening because these financial statements are often not prepared on time, with some of them actually being in arrears for 5years”. “This is why new CEOs are summoned by Public Accounts Committee of Parliament to answer questions on the tenure of their predecessors”, Dr. Yamson further stated.

He charged the Board Members to be up and doing with their central role of managing the risks that their respective organizations might be exposed to”. “For example, Ghana had 376 SOEs at the beginning of the divestiture programme but we have only 84 presently”, Dr. Yamson opined to cement the fact that Board Members of our SOEs have not been diligent”.

Integrity
Dr. Yamson quoted Paul Wolfonson’s “The world has paid Ghana’s debt and I hope this will not have to happen again”, when we opted for the HIPC programme, to encourage the Board Members to do things differently, by way of personal-integrity-driven prudence, in order to turn the fortunes of our SOEs around.

Be critical with your scrutiny
In his remarks, the Executive Chairman of SEC, Hon. Asamoah-Boateng gave the participants some insight into the Public Financial Management Bill to make them aware of their “responsibilities and the need to critically scrutinize all financial statements before appending signatures to them”.

Fear and panic
After this eye-opener by the Executive Chairman, some the participants exclaimed “This is fear and panic” to portray their shock at the enormity of task that confronts them in their new roles.