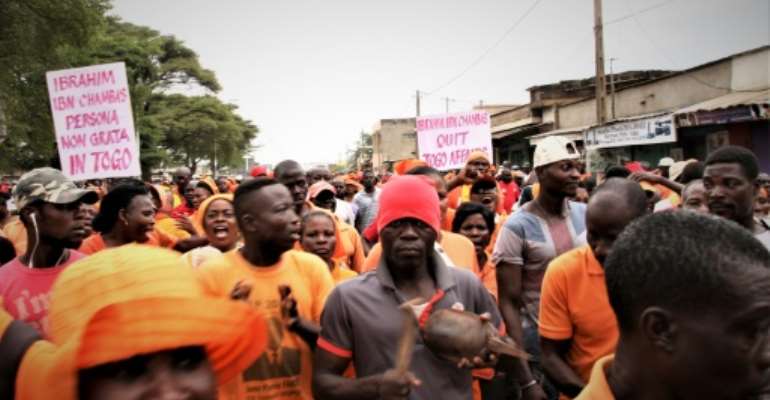 A coalition of opposition parties is hoping that pressure from the street will force the ouster of President Faure Gnassingbe. By Matteo FRASCHINI KOFFI (AFP)

Lome (AFP) - Thousands of protestors turned out in the West African state of Togo on Thursday for the second day running, in a campaign aimed at forcing out President Faure Gnassingbe.

Demonstrators converged from three points in the capital Lome for what was billed as a "march of anger" against a family which has ruled Togo for 50 years, culminating in a rally on the seafront.

"Demonstrators have used rocks to block the road from Gakpoto to St. Joseph's school, and others are preventing cars from going through," Amnesty International's director for Togo, Aime Adi, said.

In Atikoume district, angry youths refused to follow the march itinerary set down by the 14-party opposition coalition, and said they would block streets, an AFP journalist saw.

However, in some neighbourhoods on the march route, tension that was noticeable on Wednesday seemed to have eased somewhat.

Marchers said they would maintain pressure on the Gnassingbe regime.

"I am not tired and I will never be tired so long as the struggle is not over. Even if we have to march every day, I will be there," said Elie Zikla, a young man whose job is a motorbike taxi drive.

In the north of the country -- a region previously seen as reliably pro-government -- several other rallies, also drawing thousands of people, took place in the northern cities of Sokode, Bafilo and Dapaong, local residents told AFP.

However, there were no protests in the far northern town of Mango, where a young man was killed in a demonstration on September 20, which was followed by a crackdown by the authorities.

The protests are the seventh in a wave of agitation that began in August. At least four people have been killed and dozen injured.

The government, responding to unprecedented protests from the street, is proposing an overhaul of the constitution under which presidential terms would be limited to two five-year spells in office.

Gnassingbe, in power since the death of his father in 2005, was re-elected in 2010 and again in 2015, in votes that the opposition denounced as unfair.

If the two-term limit applies from the next elections, scheduled in 2020, he could theoretically remain in office until 2030.

As a result, the opposition wants the two-term restriction to be applied retroactively by restoring the 1992 constitution, in order to force Gnassingbe from office.

The president's father, General Gnassingbe Eyadema, ruled the country with an iron fist from 1967 until his death in 2005.

According to a source close to the presidency, the proposed change to the constitution will be put to a referendum "by the end of the year".