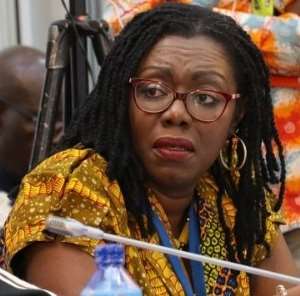 Accra, Oct 4 GNA - Mrs Ursula Owusu Ekuful, Minister of Communication, has hinted that television stations that do not live-up to their obligations under the law would not be migrated unto the digital platform.

According to her, the National Communication Authority (NCA) is currently undertaking frequency audit of all television stations in the country, saying 'this is to send a clear signal that the rules and regulations would be strictly enforced.'

Mrs Ekuful gave the hint when she spoke to the media in Parliament after the House resumed sitting for the third session of the seventh Parliament.

Mrs Ekuful said the objective for the frequency audit was to ensure that there was sanity in the system.

She explained that television stations that were conducting test transmission and failed to meet their obligations would also not be transferred unto the digital platform.

Mrs Ekuful also debunked claims that the recent NCA sanctioning of 131 radio stations in the country was politically motivated explaining that the NCA was mandated under the law to regulate the radio frequencies and without adhering to the directive the country could be plunge into anarchy.

She said the actions of the NCA to enforce the Electronic Communications Act, passed in 2008 was a step in the right direction and ought to be commended by Ghanaians.

Mrs Ekuful stated that some radio stations treated the authorisations and the rules and regulations pertaining to use of the frequencies with impunity.

She admitted that some of the fines by the NCA seemed harsh but it matched with the gravity of the offenses and infractions committed by the defaulting radio stations.

She said in all fairness it was not right for some stations to live up to their obligations while others behaved as if they were beyond sanctions.

'Any action which is aimed at freely and fairly enforcing the regulations passionately ought to be commended' she added.

Mrs Ekuful also called on other agencies to look at their enabling legislation and insist that anyone who was required to conform to it did so.

'For us to live in a society that treat all it citizens equally, we all have to be able to respect the law and its application especially without fear or favour to all sectors of society'

'I say, let the chips fall where they may and there are no sacred cows when it comes to the agencies under the Ministry of Communication' she added.

She assured that the Ministry of Communication would continue to uphold its mandate and ensure that various agencies under the ministry worked according to their rules and regulations.

Mrs Ekuful also chided Alhaji A.B.A Fuseini, Ranking Member on the Committee of Communication for his comment that the sanctions by the NCA was politically motivated.

She said it was most inappropriate.
'For anyone to suggest that there was other considerations rather than the strict application of the law is most unfortunate and ought to be withdrawn.'

She urged radio stations whose licenses had been completely revoked to cease operations since the NCA is empowered to physically close down those stations.