Chief Justice Worried About The Safety Of Judges 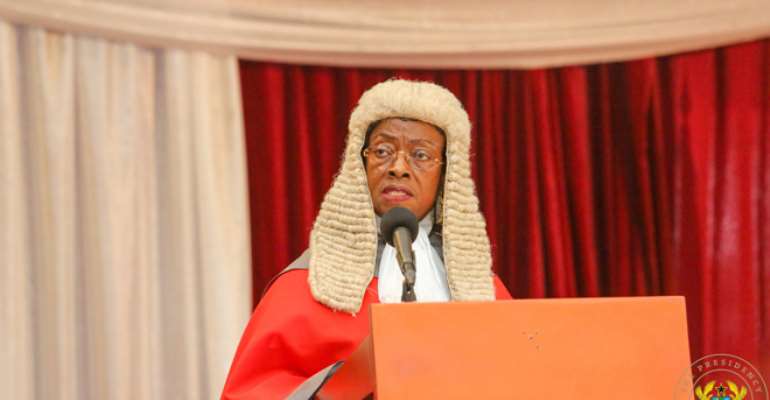 Chief Justice Sophia Akuffo has expressed worry about what she described as 'shameful' and 'unhygienic' condition of some court premises in the country.

This, she said, is hindering the delivery of justice and provision of adequate security for judges and staff of the various courts.

Ms Akuffo noted that since the coming into force of the 1992 Constitution, there had never been a government that had completely complied with the provisions of Article 127 of the Constitution, which highlights the financing and independence of the judiciary.

The chief justice was speaking at the 37th Annual General Meeting of the Association of Judges and Magistrates of Ghana in Accra.

According to her, perhaps the time has come to inquire into other modes of financing that will ensure the independence of the judiciary as enshrined in the 1992 Constitution.

She opined that the finances of the judiciary could be based on a particular percentage of the national budget.

She said, “One of the clearest examples of governments failing the judicial sector is the shabby courtrooms that we have. The environment in which we work is unsafe and some premises are even unhygienic; they are unsuitable; they are unfit for use in the delivery of justice because it even tarnishes our image.”

Ms Ms Sophia Akuffo added that the state could take into consideration “closing down some of these unsafe courts until we are put in the position to make them safe for use by the judges on day-to-day basis and for use by the public. It is about time that we showed as a nation the requisite respect for justice.”

The CJ disclosed that her outfit was negotiating with the administrator of the District Assembly Common Funds to ensure that funds are earmarked for the provision of the requisite courtrooms and administration in districts where there are no courts.

The President of Association of Judges and Magistrates of Ghana, Justice Victor Offoe, urged members to do 'self-policing' in the course of handling cases to ensure that due diligence is done, which will go a long way to improve the integrity of the judiciary.

He called on the government to provide adequate security at court premises and the bungalows of judges and magistrates, particularly those in the hinterlands.

Justice Offoe touched on the working conditions of judges and urged the government to provide their requirements.