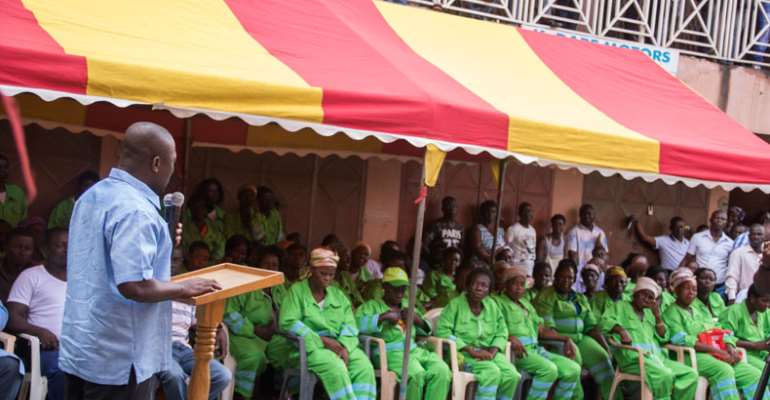 The Chief Executive of the Accra Metropolitan Assembly (AMA), Mohammed Nii Adjei Sowah, says he wants Abossey Okai to become a model business enclave in terms of sanitation in Accra.

He said focus on Abossey Okai and its environs should not only be on business but good sanitary conditions.

Mr Adjei Sowah made this known at the launch of the 'Think Clean Project,' organized by the AMA and Metropolitan Waste and Allied services (MWAS), together with the Abossey Okai Spare Parts Dealers Association, to rid Abossey Okai of filth and set example for other commercial business centers.

Under the project, all shop owners in Abossey Okai would be registered to pay GH¢10 each while those who sell on tabletop will pay GH¢5 each at the end of every month to ensure the smooth running of the project.

Households and financial institutions in the area will also pay on a daily basis.

As part of the launch, the Metropolitan Waste and Allied Services presented over 200 waste bins to be placed at vantage points in the area.

According to Mr Gershon Sogbey, the company will in addition deploy three compaction trucks, 10 3-leg tricycles, wheelbarrows, brooms, gloves and 90 personnel to ensure the success of the programme.

“As part of our Corporate Social Responsibility to the Community, we are going to provide street lights in the area since our operations will normally be carried out at night,” he said.

The Chief Executive of the Accra Metropolitan Assembly congratulated the spare parts dealers association for its immerse collaboration during the national sanitation day exercise and urged them to continue to collaborate take part in the project, adding that MWAS is the waste service provider responsible for the Abossey Okai Spare Parts Enclave.

Mr Adjei Sowah stressed that if they flout the sanitation bye laws, they would be prosecuted so they must be responsible for the filth they generate, its storage and its disposal, adding that if they fail to control the development at the market, they will lose their customers.

A board member of MWAS, Florence Larbi, expressed the company's excitement towards the project and urged everyone to be part of the project to ensure a clean Abossey Okai.

The Member of Parliament (MP) for the Ablekuma Central Constituency, Ebenezer Nii Narh Nartey, admonished service providers and their staff on one hand, and spare parts dealers on the other to make the requisite payment to enable the service providers offset their operational cost.

While calling on management of the company to pay the cleaners on time to motivate them to give off their best, he advised the cleaners not to take their employment for granted.

“Nobody should think that it is their party, which is in power so they will work as they like because when they do not perform and they are sacked, no one will mediate for them, in fact I will not be party to begging for them.”

The MP also disclosed that drains would be constructed and about 200 street lights would be fixed in Abossey Okai so that thieves would stop breaking into shops at night.

He said a taskforce had been formed to ensure compliance by all stakeholders.