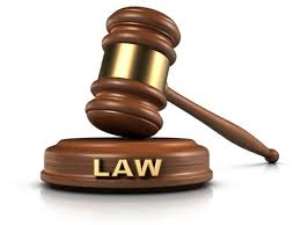 The convict, Nana Yaw who pleaded guilty to stealing would in default serve seven months imprisonment.

Prosecuting, Sergeant Joseph Lartey, told the court, presided over by Madam Magdalene Thompson, that the complainant, one Akua Fosuwa is a food vendor and reside at Cyanide in Tarkwa. The convict also lives in the same area.

He said on September 6 this year, at about 1530 hours, the convict visited the complainant at her home and while they were interacting he made her believed that there were some evil forces behind her.

The convict also claimed he had seen in the spiritual realm that the evil one had tied the complainants' provisions kiosk with black thread and as a result it was making it difficult for her to progress in life.

He said the convict then promised to deliver the complainant from her problems and he collected GH¢40.00 from her after which he left.

On September 9, at about 1600 hours, Sergeant Lartey said the convict visited the complainant again while she was preparing for a funeral and requested for a bible from her and asked her to place any amount of money on her in the bible before he prayed for her and Fosuwa placed Gh¢500.00 in the bible and handed it over to him.

The prosecution said the convict then asked the complainant to close her eyes so that he would pray for her and that in the process Yaw removed the money and replaced it with papers and gave the bible to her after the prayers.

He told the court that on that same day in the evening, the complainant wanted to settle a debt with the money but realized that it had turned into papers.

He said Fosuwa informed her neighbours and they combed the entire vicinity in search of Yaw, but he was nowhere to be found.

On September 11, at 1600 hours, the prosecutor said Fosuwa chanced on the convict and he took to his heels on seeing her, but was given a chase and arrested at Bogoso junction and handed over to the Tarkwa police.