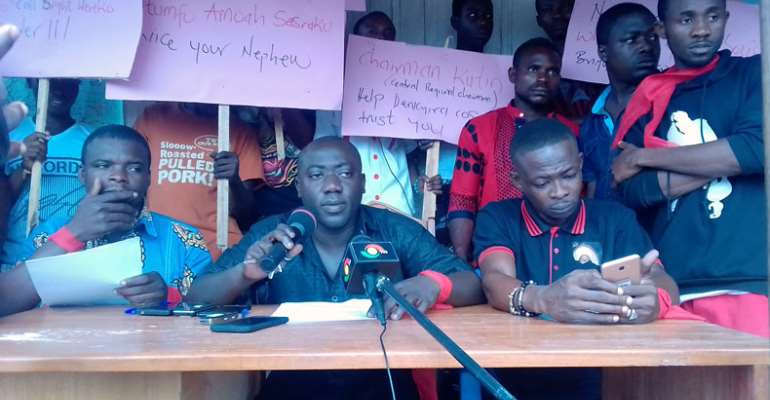 Osei Boateng addressing the media as the press conference.

The Deputy Minister who doubles as the Member of Parliament for the area is alleged to be creating division in the party which would ultimately affect the performance of the NPP in the area.

This is contained in a press statement signed by the president of the group, Osei Boateng and copied to the Chief of Staff, Central Regional Minister, Regional Chairman of the NPP, Constituency Chairman, District Police, DCE and the MP.

The group alleged that Mr. Wereko Brobbey after losing the 2008 NPP primaries went as an independent candidate against NPP's preferred choice and even organized thugs to hoot at Nana Addo, the then Presidential candidate.

“In the interest of peace the party forgave him and accepted him back after he lost the 2008 elections. The evidence is that Nana Addo has appointed him as the deputy minister for employment,” it said.

According to the press statement, Mr Wereko Brobbey has shown and continues to show that he has not changed.

It explained that, when the current MP lost the Parliamentary election in 2012, he refused to campaign for the elected candidate but rather sabotaged him with all sorts of evil machinations.

“Indeed he was able to achieve his selfish ambition as the party lost the seat to NDC. He has shown that if it is not him or anybody from Twifo Hemang then it should not be any one else” it said.

The group said that, to show his hatred to the DCE and his mission to make him unpopular in the eyes of the people in the district, the MP organized his boys from Hemang to demonstrate against the DCE during assembly sitting.

They are therefore calling on the Central Regional Minister, Kwamina Duncan as a matter of urgency to call the MP to order for peace to prevail in the district.