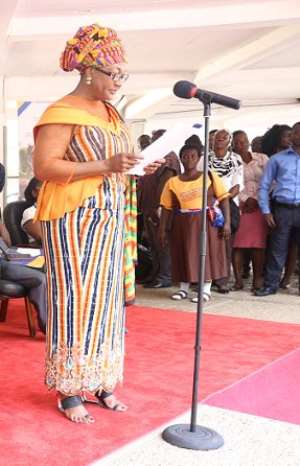 She said female entrepreneurs continue to work under difficult conditions than their male counterparts but have less access and control over the most critical economic resources such as land and credit and the impediments from negative socio-cultural and political factors.

This, she said, has limited many women from achieving their full potential and neglected them to a complementary role in national development.

Ms Afisah Djaba was speaking at a policy dialogue on inclusiveness of market women in national development through partnership over the weekend in Accra.

The dialogue was held to create a platform for street and market vendors, kayayei, slum dwellers and the entire informal sector workers in Accra to deliberate on critical matters affecting market women who are dominant in the informal sector.

It was also to engage policy makers and government appointees on pertinent issues concerning their conditions of work.

She use the opportunity to extend her appreciation to the United Nation for appointing President, Nana Addo Dankwa Akufo Addo, as the Gender Champion and Co-chair of the Sustainable Development Goals (SDGs).

Ms Afisah Djaba said statistics in the 2014 World Bank report indicate that women in Ghana are the most disadvantaged in terms of economic, social and political opportunities in spite of constituting about 52 per cent of the population and 49.71 per cent of the active labour force.

She said it was also a fact that, females are major wage earners in many families yet their labour was not accounted for whilst the informal sector was again disadvantaged with highly risky working environment with little or non- existent infrastructural support, such as educational facilities, sanitation and health.

The Minister said the MoGCSP has undertaken several interventions to propel women's effective participation in economic growth of the country and shown commitment regarding the adoption of vigorous policies and programmes to overcome gender inequality and promote women's empowerment, guarantee the rights of women and children and advance social justice.

She said Ghana has adopted a National Gender Policy, 2015 which seeks to mainstream gender concerns in all the planning processes of respective Ministries, Departments and Agencies.

'The Ministry's flagship project, the Livelihood Empowerment Against Poverty (LEAP) cash transfer programme has since its inception provided bi-monthly cash grants to over 943,842 extreme poor individuals as at the end of 2016, out of this figure 56 per cent are women.

'The School feeding programme is another social intervention which is a big opportunity to use Ghana's home grown food and ingredients to provide one hot and balanced meal per day to children of the beneficiary schools to reduce hunger and malnutrition and to increase school retention rate; especially for girls.'

The NPP Government has decided to set aside 50 per cent of the Micro Finance and Small Loans Center (MASLOC), funds for female applicants as part of its strategic interventions to ensure gender equality and women empowerment.