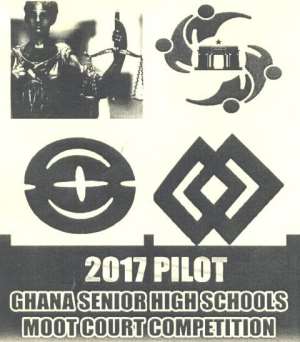 For their prize, they were awarded the Kunshell Iddrisu Prize for their excellent performance in the two-day event.

The Presbyterian Boys Secondary School was adjudged First Runner up and was awarded with the Samuel Manteaw Prize.

In a court setting, St Thomas Aquinas Senior High School and the Presbyterian Boys Secondary School argued their way through as applicants and respondents to the finals following the preliminary rounds of the pilot Senior High School Moot Court Competition held among eight schools in Accra on Thursday.

Prizes and certificates were also presented to all participating schools, teams and their coaches with the best 'Oralist' award being the Kissi Agyebeng prize going to Master Emmanuel Gbagbo Edudzi of St Thomas Aquinas Senior High School and the best essay award named the Albert Frimpong prize also being awarded the winning school.

The event which was held under the theme: 'Human Rights Education in Secondary Schools', had the objective of engaging mooting skills of senior high school students throughout the country over a topical Constitutional Law issue that affects their fundamental human rights on the campuses.

It was the initiative of the University of Ghana School of Law, in partnership with the Centre for Human Rights, University of Pretoria, South Africa.

Speaking at the closing ceremony, Mr Richard Quayson, the Deputy Commissioner of the Commission on Human Rights and Administrative Justice, urged stakeholders to give education in the country the right balance.

He said it is time stakeholders in the academia sector emphasize on integrity and character just as much as they emphasized knowledge development.

'Unfortunately, children in education today are pushed to acquire knowledge, and not given adequate practical experience.

'The practice of what they learn in school is a fundamental part of education, it is what will give them the confidence and skill that they will need in their future endeavours or areas of employment, and yet it is strangely underemphasized in our education system,' he said.

Mr Quayson bemoaned how every child today see corruption, indiscipline, lawlessness and impunity, to the extent that even children in primary schools were induced to cheat regularly in school tests and exams.

'The importance present generation of leaders place on them today, and how we prepare them, will determine to a large extent how good and effective they would be when they assume the mantle of leadership,' he said.

He lauded organizers for the event for their vision and courage and urged them to sustain the programme which sought to promote integrity and the respect of fundamental human rights of the citizenry especially the youth.

Dr Kwadwo Appiagyei-Atua, a Senior Lecturer of the School of Law, University of Ghana, in an interview with the Ghana News Agency, said many students were not conversant with the Constitution and did not know much about their fundamental human rights, - necessitated the organization of the competition.

'By this approach, it is hoped that the exercise will help the students to develop their knowledge, understanding and application of the 1992 Constitution of Ghana and the values that it embodies,' he said.

Dr Appiagyei-Atua told the GNA that it was the plan of organizers to extend the coverage nationwide from next year and organize it as an annual event.

Justice Julius Ansah, a Justice of the Supreme Court, lauding the organizers said the programme which represented a learning curve for teachers and the Ghana Education Service would establish a culture of respect for human rights on the various secondary school campuses.

'It is enough for the State to promote and protect the rights of children, children have the agency which can be expressed to determine the extent to which they should be treated, especially in a school environment,' he said.