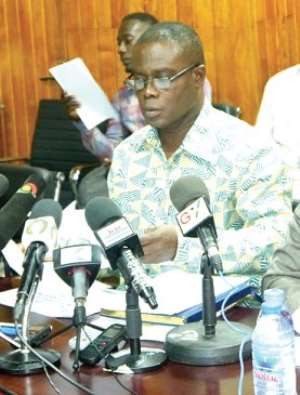 The report examines operational statistical of business by sector, size of business and focuses on deriving trading account of business, which covers revenue, cost of production of goods and services and the gross profit.

It also examined the detail sources of receipt of business and sources of cost of production and capital formation, which covers depreciation, additions to fixed and disposal assets and stock of fixed assets.

Mr Baah Wadieh, the Acting Government Statistician said the overall objective of the IBES was to provide reliable, timely and relevant economic statistics to support the formulation and implementation of policies and strategies to stimulate growth in all sectors of the economy.

The specific objectives are to obtain data on production, as a basis for government and business analysis and decision making and measure the contribution of each sector and region to Ghana's production.

It is also to provide bench mark data for debasing and updating the Gross Domestic Product of the annual GSS survey of industry and other economic series and to provide data needed to estimate and re-base the gross value added for all sectors in the Ghanaian economy.

He said key findings from the survey shows that over 70 per cent of all revenue generated by establishment was concentrated only in the Greater Accra (G/A) alone which does not align well with the objectives of decentralization.

Mr Wadieh said the GSS had over the past years produced policy relevant reports, which if used exhaustively will enhance evidence based decision-making, adding that, the IBES report was another classical relevant policy document.

He said IBES was the first economic census ever to be conducted in Ghana, which covered all sectors of the Ghanaian economy.

Mr Alan John Kwadwo Kyerematen, Minister of Trade and Industry said the scarcity of comprehensive statistics on businesses at all levels in Ghana was a major concern to the Ministry and, therefore, the availability of the IBES II report was expected to fill important data gaps in the policy discourse.

He said since the last industrial census was conducted in Ghana in 2003, it took a decade to produce another comprehensive set of statistics on businesses, thereby, bringing an end the lack of this type of data which were vitally needed for policy planning at the ministry.

Mr Kyerematen said government had no choice than to facilitate all processes that would make the private sector become the real engine of growth.

This he said was the only way to the quest for human centered growth and development, as quality jobs would be created to improve the welfare of the populace.

'I believe that the government initiative of one district-one factory would be the beginning of solving this inequality,' he said.

He said whilst the regional disparities call for a concerted effort at embarking on policies and programmes beyond the One District-One Factory programme, this will ensure an enabling environment required for businesses in the other regions to attract entrepreneurs.

The Trade Minister said even though data collection in our part of the world is a very expensive venture, the positive impact of the use of a good quality data like the IBES II report cannot be over emphasized.

He urged support for the GSS in the production of relevant, timely and accurate statistics as Ghanaians are aware of a worry phenomenon associated with undertaking business surveys in Ghana.

Dr Philomena Nyarko, a Former Government Statistician said the service sector was still the driver of Ghana's economy according to the figures shown in the report.

She said what was coming from the service sector was because of Ghana's oil find and the performance of the insurance industry.

She commended the GSS for the good work done, as it was a difficult task to conduct surveys and research for information of a kind in the country.