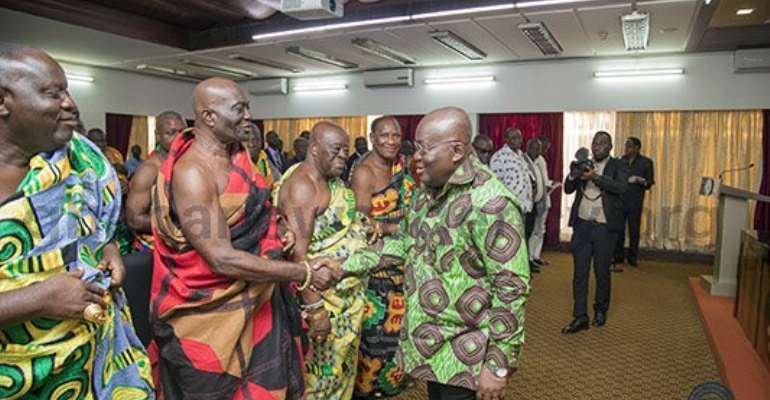 Accra, Sept. 28, GNA - The Council of Chiefs and Queen mothers of Ahafo, in the Brong Ahafo Region have pledged to assist President Nana Addo Dankwa Akufo-Addo actualize his vision and programmes for Ghana.

They also expressed gratitude and commended the President for implementing policies aimed at improving the living standards of Ghanaians.

The Ahafo traditional rulers made the pledge on Wednesday when they called on the president at the Flagstaff House in Accra on Wednesday, to congratulate him on his victory in the 2016 elections, as well as to wish him well during his tenure of office.

The Omanhene of Yamfo Traditional Area, Nana Ansah Adu Baah, who doubles as the Chairman of the Ahafo Council of Chiefs, told President Akufo-Addo that 'we are equally delighted at the introduction of the Free SHS initiative that has hit the spine of the entire nation.'

'We pledge to assist you to actualise this bold programme and make it a success for posterity.'

They were also 'specifically grateful' to President Akufo-Addo and government for 'choosing to launch the Planting for Food and Jobs programme at Goaso.'

Nana Ansah Adu Baah told the President that the people of the Ahafo area who are mostly farmers had leveraged on the condusive factors for production created by the programme to 'seriously plunge into agriculture'.

He was confident that the 'Planting for Food and Jobs' programme would enable the country record a bumper harvest, leading to an export of food staples from Ghana.

Nana Ansah Adu Baah told the President that the proposed creation of the Ahafo region 'will leave positive and indelible impressions about you.

'This will be for posterity. We trust the commitment and zeal you have exhibited so far in re-shaping the destiny of Ghana.'

President Akufo-Addo thanked the Ahafo Council of Chiefs for the courtesy of their visit and for wishing him well during his tenure of office.

He told them that countries that have progressed rapidly, like the United States of America, put free education at the center of developmental agenda, thus creating an educated workforce that has inspired the emergence of the most powerful economy so far known to human history. 'I want you to support and back me fully in the implementation of the Free SHS policy. We are implementing this policy because we want the rapid progress of our country. So I am happy that you, the Ahafo Council of Chiefs, are in support of this programme,' he added.

President Akufo-Addo said the decline in the agricultural fortunes of the country, leading to the importation of food from neighbouring countries was the reason for instituting the Progranmme for Planting for Food and jobs to ensure food security for Ghana.

'It is for this reason that we instituted the Programme for Planting for Food and Jobs. This is just a pilot programme, beginning with just two hundred thousand farmers. I am hopeful that by the end of the four years, at least two and half million farmers would have been involved in the programme,' he assured.

'We want to make food staples affordable in Ghana, and also export the surplus. This has been done before in Ghana and I am confident we can repeat this feat again. I need the support of all of you in combating the smuggling of inputs and fertiliser. Those engaged in these despicable acts only hurt our collective future.'

President Akufo-Addo told the chiefs that the proposed Ahafo region was 'long overdue,' indicating that in the coming weeks, he would appoint a Commission of Inquiry to investigate the need for the creation of the Ahafo Region.

He told the traditional rulers that if the Commission found arguments for the creation of the region convincing, it would make recommendation for a referendum, after which he (President) would refer the matter to the Electoral Commission for the referendum to be held.

A vote for reorganization will be carried, only if a minimum of 50 percent of affected registered voters vote, and of those voting, 80 percent vote in favour.

President Akufo-Addo reminded the Chiefs of the crucial role they have to play in the creation of the Ahafo Region in mobilising support from the people.