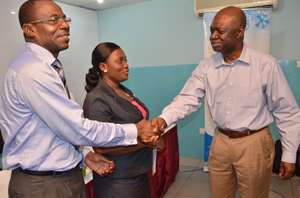 Mr Ameyibor known in journalism circles as "Oga" have served the GJA under various leadership capacities even after his dedicated service as GJA President during the difficult developmental stages of the association.

Mr Edward Ameyibor, former Supervising Chief Editor of the Ghana News Agency was surprised that his name was omitted by the GJA Elections Committee.

Mr Kpodo explained that the GJA Election list was compiled by the GJA secretariat and apologized to Mr Edward Ameyibor for the embarrassment.

Akufo-Addo, Ken Take Ghana Back To HIPC – Mahama
10 minutes ago