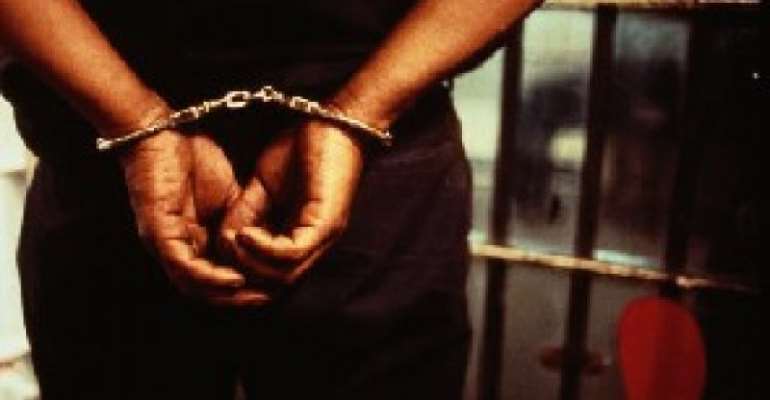 Felix Tubiga, a student, and Eric Appiah, a mason, have been put before an Accra Circuit Court for allegedly robbing a couple of $10,000, GH¢3,000.00, and a vehicle among other things at Adenta.

The two, charged with conspiracy to rob and robbery, were alleged to have shot an ex-soldier and a neighbour who came to the aid of the couple.

They pleaded not guilty.
The court, presided over by Ms Eva Bannerman-Williams, denied them bail and remanded them into police custody to reappear on October 19.

Defence Counsel for Tubiga prayed the court to admit his client to bail since he had spent 45 days in the custody of the Police and, as a student, he would be writing an examination very soon.

Counsel said they were ready to produce Tubiga's Student Identity Card from a Computer Training Institute at East Legon.

According to Defence Counsel, Tubiga, when granted bail, would not abscond and he has people to stand surety when he is admitted to bail.

In the case of Appiah, Defence Counsel said he was innocent and regretted that the complainants in the matter only pointed him out when he accompanied Tubiga's mother to court.

Prosecuting, Chief Inspector Victor Dosoo, opposed to granting the bail, adding that if Tubiga was a student he should furnish the Police with his timetable so they could assist him in that direction.

The case, as narrated by Chief Inspector Dosoo, was that the complainants Antwi Bosiako Ofori, an Accountant and Grace Ofori, a Marketing Executive, are couples residing at Frafraha in Accra.

According to Chief Inspector Dosoo, Tubiga resides at Frafraha whilst Appiah lived at Abossey Okai.

On August 5, this year, at about 0400 hours, whilst the complainants were sleeping, the accused persons broke into their house with a gun and tied Mr. Ofori.

According to prosecution, after the accused persons had left the complainant's residence, Mr Ofori sought assistance from neighbours and one Billy Gyimah, an ex-soldier, followed him to the house to ascertain the robbery incident.

The prosecutor said the accused persons returned to the complainants' house and one of the robbers shot Mr Gyimah on the left part of his chest and bolted.

The matter was reported to the Police and on August 17 this year, the Regional Criminal Investigations Department got wind of the arrest of Tubiga by the Adenta Police and they went for him.

During a search conducted in Tubiga's room, two necklaces were found and cash in the sum of GH¢4,800.00 was also retrieved. When Tubiga was quizzed over the money he was unable to account for it.

Chief Inspector Dosoo said on September 20, this year, Mr. Ofori identified Appiah when he showed up at the Circuit Court premises.