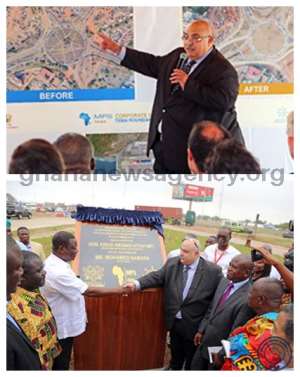 The Minister said this on Wednesday at the inauguration of the reconstructed Tema Motorway roundabout as part of the Corporate Social responsibility of Meridian Port Services (MPS) to help ease off traffic congestion in the area.

'It is significant and I would want to lay emphasis on that. This project has been executed and completed in a record time. This is the standard that I want all contractors working in our country to adopt and follow because delay in project works, its implementation and construction brings in their wake a lot of difficulties,' he said.

He observed that the Ghana Highway Authority and the Department of Urban Roads regarded the Tema Motorway roundabout as one of the critical bottlenecks in the network of roads, and they had been considering various interventions 'to minimize the unbridled delays that motorists face navigating the motorway roundabout.'

He informed that the bottlenecks affected both local and international travelers using the N1 Highway and commuters in and around Tema, Ashaiman, Prampram and beyond.

He said, 'The Tema Motorway roundabout as a 5-leg intersection comprising the Accra-Tema motorway, the Hospital road, the Harbour road, the Aflao road, and the Akosombo road all contributing traffic to and converging at the roundabout.'

He said traffic contributed by each of the five legs to the roundabout resulted in the creation of very slow movement through the circle with speeds as low as 5km/h during peak hours.

He observed that this problem was made worse with the increase in the number of vessels arriving at the Tema Port, and that the new port expansion was expected to generate additional haulage truck volume from the Port through the roundabout which would significantly increase traffic at the roundabout.

He said, 'The Ministry's ultimate goal is to provide a multi-level grade separated interchange to ensure free flow of traffic to and from the five approaches with an improved level of service.' and informed of plans to upgrade the Accra-Tema Motorway into a 3-Lane dual carriageway.

Mr. Amoako-Attah praised the MPS for their efforts in starting and completing the project saying' after eight months of hard work, MPS has concluded the improvement works and as we can all see, traffic is flowing more freely around the roundabout and we are happy for it.'

He asked other institutions to emulate MPS's gesture and assist the government in its delivery of social services to the citizenry.

Chief Executive Officer (CEO) of MPS, Mr. Mohamed Samara, said the 'achievement was not only for us businessmen, but for the entire community, adding that 'I am glad that this has eased the lives of people.'

He said they also had plans to create an interchange at the Sakumono and Community Three junction on the beach road, and create an eight lane express way from the new harbour to the motorway.

The Director General of Ghana Ports and Harbors Authority (GPHA), Mr. Paul Asare Ansah, observed that 'It was such a crisis. After 12 noon seeing the trucks coming from the Port wanting to exist the motorway and there was no alternative than entering this chaos around the motorway.

'And so it was such a delight that following the agreement to expand the Port, there was this social responsibility to expand the motorway. And today we can see to a very reasonable extent that traffic is flowing in and out of the Port with minimum challenges.'

Mr. Ansah said 'we cannot wait to add the rail connection because any port that can be said to be very efficient must have as an obligation to intermodal connectivity, and as we expand the Port and roads we need plans to expand the railways as well'.