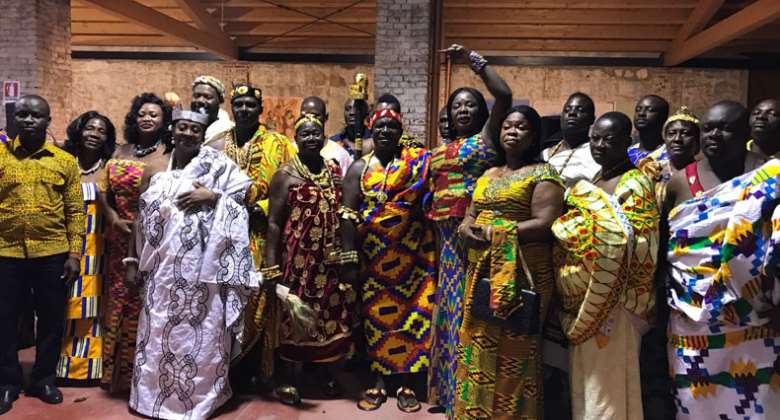 On Sunday, 17th September, 2017, the Hon. Member of the Council of State representing the Western Region and native of Nzema, Mad. Eunice Jaqueline Buah, joined the Nzema Community in Italy, comprising Ghanaian and Ivorian nationals, in the celebration of the 3rd Edition of the Kundum/Abissa Festival in Palermo.

She was accompanied by her spouse, Nana Asomah Hinneh (DCOP), head of the Volta Regional Police Command.

Also in her company were the Ambassador Extraordinary and Plenipotentiary of the Republic of Ghana to the Republic of Italy, Her Excellency, Ms. Paulina Patience Abayage and the Western Regional Chairman of the New Patriotic Party (NPP), Mr. Francis Ndede Siah.

The Deputy Minister for Chieftaincy and Religions Affairs and Member of Parliament for Jomoro, Hon. Paul Essien, led a seventeen (17) – member high-powered delegation made up of prominent Chiefs and Queen Mothers from Nzema, to participate in the Festival. Notable among the delegation was the President of the Nzema-West Traditional Council, Awulae Angama Tu Agyan II and the Queen Mother of Jomoro, Awulae Nda Bozomah II.

Also present were the traditional authority representing the Nzema ethnic group in Palermo, led by Nana Miezah Seme and Obahima Asuah, as well as a cross-section of Ghanaian and Ivorian nationals and Italian-Sicilian businessmen and entrepreneurs.

A grand colourful durbar of Chiefs and Queen Mothers as well as the people of Nzema was organized to climax the celebration of the Festival. The durbar, which displayed Africa's rich culture and tradition, as well as the history of the Nzema ethnic group, was marked by traditional music and dance performances from Nzemaland and speeches delivered by the dignitaries present.

In a welcome address, Nana Miezah Seme expressed sincere appreciation to Hon. Eunice Buah for her presence and immense contribution making the celebration of the Festival possible and facilitating the trip as well as the participation of the high-powered delegation in the Festival. He assured of the support of the Nzema Diaspora including the traditional authorities toward the commitment and efforts of the Member of the Council of State at ensuring the development of Nzemaland to better the lives of the Nzema people.

In two (2) separate statements delivered, respectively, by Awulae Angama Tu Agyan II and Awulae Nda Bozomah II, the personalities added their voices in expressing gratitude to Hon. Eunice Buah for the opportunity to witness and partake in the celebration of the Kundum Festival held in the Diaspora. They expressed willingness and readiness, as agents of development, to create the enabling environment in support of envisaged investment projects and programmes from Italy-Sicily for the benefit of the people of Nzema.

In a statement, Hon. Eunice Buah, acknowledging the presence of the respective participants, commended the Nzema Diaspora for putting together a memorable Kundum Festival. She urged the Diaspora to seize the opportunity of making meaningful contributions toward the development of Nzema, in the light of the Government's flagship programmes of 'One District One Factory', 'Planting for Food and Jobs' and 'One Village one Dam, which are aimed at providing job opportunities, especially for the youth. She expressed the hope that, for example, the viable factories, when created, would ultimately, reduce the youth's desire to travel to Europe to seek greener pastures which were non-existent, and further produce material goods for consumption as well as for export purposes to generate increased revenue towards development. Mad. Eunice Buah encouraged the Diaspora to attract Italian-Sicilian investments marketing the available opportunities in Nzemaland for business. She further advised the Nzema Community and their leadership to work hard at acquiring skills, knowledge and expertise, taking advantage of the vast opportunities available abroad for their own benefit. The Member of the Council of State concluded her remark advising her people to be each other's keeper, disciplined and law abiding.

On her part, Her Excellency the Ambassador, acknowledging the various contributions of the Diaspora, advised the Nzema ethnic group to work hard at winning more investments for Ghana to assist the Government achieve its objective of transforming the Ghanaian economy to move beyond aid. She stated that the Government of His Excellency, Nana Addo Dankwa Akufo-Addo, had prioritized the engagement of the Diaspora, and further assured of the readiness of the Embassy of Ghana to offer the relevant support and assistance towards the activities of the Diaspora encouraging the latter to identify practical ways of contributing to Government's development efforts back home.

As part of the Festival, a conference, jointly organized by the Nzema group in collaboration with the Honorary Consulates of Ghana and Ivory Coast, in Palermo, was held under the theme: “Traditional Authorities: Custodians of Culture and Tradition, Agents of Development”. The conference, primarily, presented the various ongoing as well as envisaged projects for the Nzemaland. One of such projects, mainly supported by the Rotary Clubs in Palermo, involving Ghanaian and Ivorian designers as well as Sicilian craftsmen, is a 'Korai x Kente (KxK) Eco-Craft and Design', aimed at promoting African Art, particularly, fabrics and crafts. The project has, successfully, built a social cooperative 'KxK Craft Laboratory', situated at the heart of the city of Palermo, for the purpose of valorizing the Art to generate revenue for development.

The occasion was also used to present an ongoing project of cooperation between the Mazara del Vallo Agricultural Production District in Sicily and the Government of Ivory Coast, in the area of Fisheries, towards the development of the Nzema coastal area of ​​Côte d'Ivoire.

In a brief remark, Hon. Eunice Buah, acknowledged the Sicilian business community for their support towards the development efforts of the Nzema Community in Sicily for the benefit of Nzemaland and emphasized the need to uphold the partnership established between the groups with the hope of recording significant economic successes for the mutual benefit of the two sides. She seized the opportunity to present to the Italian-Sicilian businessmen and entrepreneurs present, other investment opportunities available for business in Nzema, including agriculture, agro and cocoa processing, fisheries, energy, oil & gas, infrastructure, industry and mining, and highlighted the Government's flagship programmes of 'One District One Factory', 'Planting for Food and Jobs' as well as 'One Village one Dam'. The Hon. Member of the Council of State urged the businessmen to take advantage of Ghana's stable political climate, which continued to win the admiration of the investor community across the globe, to expand their investment portfolios and also encourage their Sicilian business counterparts to do same. Whilst proposing cooperation between the Mazara del Vallo Agricultural Production District in Sicily and Nzema, Madam Eunice Buah urged that the Fisheries project created in the Nzema coastal area of Ivory Coast be expanded to include the Nzema coastal area in Ghana.

Adding to the Hon. Member's statement, Her Excellency the Ambassador intimated that Ghana was not only ripe for business, but had strong economic fundamentals which supported growth and development, as well as a very well developed human resource base ready to support such business activities. To that end, Her Excellency proposed cooperation by which Sicily, and for that matter, Italy, would assist Ghana to realize her objective of industrializing her economy by combining her rich expertise in technology with Ghana's raw materials and natural resources, enabling the latter to cut waste, add value, increase revenue and create jobs. Her Excellency continued that doing business in Ghana further opened a gateway to doing business in the ECOWAS sub-region and on the African Continent and encouraged the Sicilian business community to explore Ghana as a preferred destination for investment.

On a final note, the Queen Mother, Awulae Nda Bozomah II, stressed the support of the Western Regional Traditional Authority and the people of Nzemaland toward the outcomes of the interactions held at the conference in furtherance of the envisaged goals.

The Council of State member bore the expenses of the 17-member delegation's round trip, hotel accommodation et al.