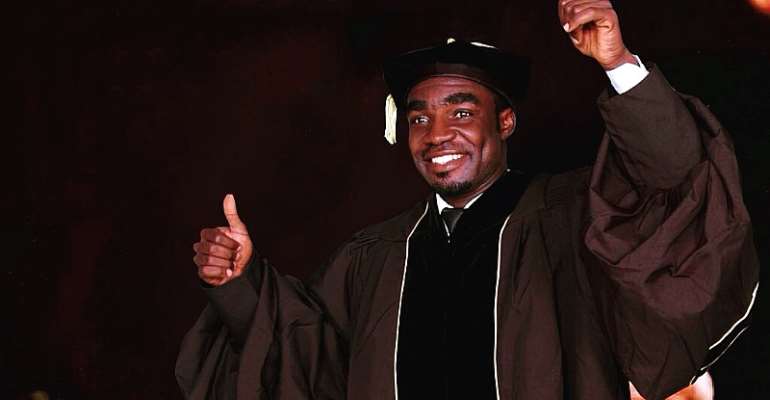 A 28-year Ghanaian Dr. Sebastian Osumanu, obtained his Doctorate degree from the University of Amsterdam sweeping five awards and becoming the most celebrated student of the year.

Dr. Osumanu became an Economics noble prize winner in 2014 after he graduated with a master degree in that same university with other awards.

He is a former student of the University of Cape Coast, Ghana where he had his first degree in Economics. At the senior high school of Breman Asikuma, he passed out his high school examinations before furthering to the above mentioned university.

He is currently holding an unconfirmed (from him) appointment with the World Bank Group as a Chief Economist to a located country in Europe. He was at the graduation ceremony described as the new era of African youth of change tool who will contribute to the growth and development of the Africa continent.

However he was likened to the current Vice President of the Republic of Ghana who is also an Economist and a Northerner but Dr. Osumanu after recognizing his Vice President credentials and achievements said, indeed he is a mentor but he looks up to be the Sebastian Osumanu who will mentor the younger generation also.

He also stated that having a PhD at age 28 do not fill his heart with joy because age doesn't really determine human efficiency and productivity but rather determination, hard work, dedication and life experiences. Finally he advices the students to put more seriousness and hard work in their studies so as to achieve their goals in life .