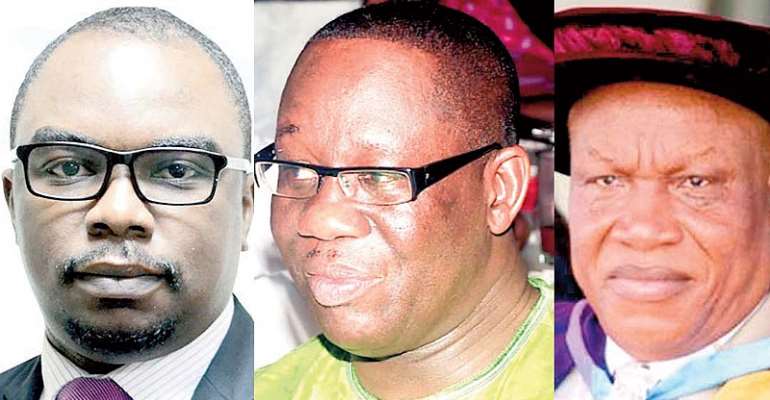 According to EOCO sources, Mr Afaglo, who claims to be a doctorate degree holder, does not have any such certificate but got the plum job as General Manager MIS – under Joshua Alabi as Board Chairman and Ernest Thompson as Director General.

He neither has a masters' degree nor first degree, EOCO revealed.

The officer has therefore been interdicted to allow EOCO to probe him.

The interdiction comes at a time when there is public disaffection over SSNIT's reckless spending of $72 million for software acquisition for its operations.

Perfect Business System is headed by a certain Juliet Kramah, who is said to be close to the immediate past first family.

The contract, awarded in 2012, was to automate processes at the Trust.

The initial contract sum was $34 million but the Trust ended up spending more within the period of four years.

According to the current Director-General of SSNIT, Dr. John Ofori Tenkorang, the current state of the software leaves SSNIT with more cost due to intermittent repairs and maintenance.

“The last time a number was communicated to me, the number stood at $72 million but I can tell you that the system is still not functioning as it should, and each time we have to make revisions or get certain corrections made; these things are billed as change requests which are also billable so until the system is fully deployed and working properly, there is a chance that the number will be bigger than what I've actually mentioned to you right now,” he told Citi Fm in Accra.

Fraud
EOCO uncovered the fraud during investigations into Afaglo's crucial role in the scandal regarding the multi-million dollar digitization contract.

According to EOCO, Mr Afaglo was selected as the General Manager of the MIS because of his 'impeccable' credentials.

He had been sacked in previous employments for allegedly presenting fake documents, the anti-graft agency has said.

Inflated Cost
Details are emerging about how officials of SSNIT inflated prices in the contracts for the automation of the Trust's systems – the total sum of which is now hovering around over $72 million.

Main Contractor
The contract was awarded to Perfect Business System/ Silver Lake Consortium in 2011 during the Mahama-led National Democratic Congress (NDC) administration, but in 2016 the total cost had ballooned to $66 million, and now $72 million, although the OBS Software installed is not running as expected.

To make matters worse, the server to the OBS Software, which was supposed to be a turnkey, is sitting somewhere in Malaysia and additionally, SSNIT does not have the copyright to the software, even after spending so much on the whole project.

Crazy Deal
Bright B. Simons, the Director of Development Research at IMANI-Ghana and Coordinator of mPedigree Network, has described the massive over-pricing as ‘crazy deal.'

“They want us to believe they bought it for more than 500,000 dollars. Are you crazy? We don’t lie about stuff like that…it is a catalogue matter,” he said on Joy FM in Accra yesterday.

Varied Contract
Mr Simons said Ghanaians have cause to be angry because the public has been ripped off in the deals, adding that per the terms of the tender bid, the contract sum was not to be varied beyond 14%, but it ended up being varied by about 100%.

He explained that SSNIT painted a picture of an ICT project that required some complex technical components and expertise when they are simply ordinary components.

“A lot of the challenge …is that even though some of the items are perfectly mundane, they are being priced as if some specialist skills were needed,” he observed.

Bright Simons said SSNIT’s request to the project execution companies – Perfect Business Solutions and Silverlake Consortium – was needless because it could have gotten all that it needed by dealing directly with the manufacturer in Malaysia or simply buying online.

Online Check
“Anybody can go online, go to the producer’s website and check the prices so you don’t need a system integrator with some specialist skills. There is no procurement specialty in this thing,” he underscored.

Mr Simons also faulted the technical ability of the company selected to integrate systems at SSNIT, wondering, “Which of them had the experience to be system integrators?”

He said Silverlake deals in insurance management systems or provident fund management solutions, and added that the contract could have been done by seven other companies, each supplying a service based on their specialty.

“We had a situation whereby people who are not very good at system integration taking a contract, even though designed as a system integration contract, is packaged as software development contract. And they are going around with sub-contractors and padding the cost,” Mr Simons lamented.

Bidding Companies
Prices quoted by 10 companies that bid for the OBS Project – which was given to Perfect Business System/Silver Lake Consortium – have been revealed.

Mr Simons expressed concern about how a hardware retailer whom he said had 'zero experience' developing complex enterprise software system, won a multi-million dollar SSNIT contract to furnish this incredibly complex organisation with a full-spectrum, so-called, ‘operational business suite’, which system is supposed to encompass every layer of the organisation’s operational activities.

The rationale behind the whole project was to reduce the amount of paper work involved in processing pensions and cut the time spent by the already stressed retirees; but DAILY GUIDE understands it has rather come to worsen the overhead costs of SSNIT.

NDC's Fear & Panic
During the weekend, the immediate-past SSNIT Director-General, Ernest Thompson, who supervised the massive 'rip-off,' admitted on radio that the Trust was doing the project but was not sure about the scope, adding that it was able to get some deliverables.

Already, two NDC gurus seem to be robbing each other's name in the mud in what appears to be a desperate attempt to distance themselves from the stinky deal that has caused public uproar.

The revelation of the deal is apparently causing tension among members of the NDC, with Prof. Joshua Alabi, describing the confusion among the rank and file of the NDC as a 'dog bites dog' situation.

He appeared to have shifted the blame on his predecessor, Kwame Peprah, under whose chairmanship of the SSNIT Board the deal was cooked.

Mr Peprah, one-time Finance Minister, who was jailed for causing financial loss to the state, rejected the claim.

Details are even emerging about how a lawyer for SSNIT objected to the inclusion of certain aspects in the contract, which he said was going to have serious financial consequences for the Trust.