Managing A University Is Not The Same As Managing A Country - Can Alabi Manage A Country? 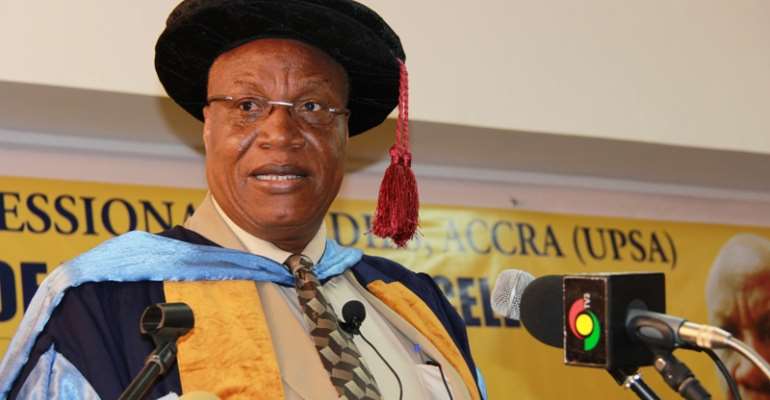 One of the most frequently asked questions since the grassroots of the NDC started calling for Prof Joshua Alabi to avail himself for the presidential slot of the party is whether he can manage a country. To them managing a university is not the same as managing a country.

Rawlings was a former military officer. He was considered a strong disciplinarian, affable, down to earth, easy going, charismatic and exceptionally fluent. On the contrary he has often been accused of having an explosive temperament. Lately he has earned for himself DR BOOM. His educational background was not particularly impressive. Rawlings educational qualification was below first degree. Yet this was the man who ruled Ghana for 19 years, the longest in our history, both as a dictator and a democrat. His achievements are visible and the NDC continues to ride on his legacy.

If indeed success is the ability to achieve, impact on lives and stay on power for long, then undoubtedly Rawlings is the most successful president of Ghana.

J. A. Kuffour succeeded Rawlings. His major qualities were his perceived patience and gentility. He was nicknamed GENTLE GIANT. His highest educational qualification was first degree. On the negative, he was viewed as cunning. Kuffour was president for two successful terms and his projects were flooded in every corner of the country. He impacted lives, no doubt.

Prof Mills came in as exceptionally patient and peaceful person and these qualities earned him the title ASOMDWEHENE (Peaceful king). He was a professor. On the other hand, his critics viewed him as a weak leader. Mills impacted lives of Ghanaians. Had death not laid its icy hands on him, perhaps, he would have been the president with the best track record of success. He did not just preach a better Ghana, he walked his talk.

Mr J. D. Mahama rose to power after the sudden demise of Mills. He was touted as a great communicator, affable, gentle, epitome of modernity and non vindictive. His highest education is Masters. On the other hand, he was criticised as not being able to punish elements around him. JM as he is affectionately called impacted lives and his achievements stand tall. His projects were extraordinary. If success means executing projects, I will say that he was successful. Unfortunately, all elements of history and certain government decisions which might not have augur well for the people conspired to make him a one-term president.

Then came Nana Addo. His admirers claim he is incorruptible, firm and resolute. These qualities plus his juicy and unattainable promises brought him to the presidency. So far Nana Addo has exhibited weakness in fighting his own alleged corrupt officials and his incorruptible virtue is fast fading.

He is presiding over the most indisciplined government ever in my view. His government is few months old so it will not be fair to draw any conclusions for now. Nana Addo's highest qualification is first degree. Though he claims to be a lawyer, he has been challenged by his critics to produce his law certificate but to this day he has failed to show evidence of his law education.

What about Joshua Alabi? What does he bring on board? A closer look at him, he is very affable, easy going, down to earth with good communication skills, a marketer and a transformer. Alabi easily blends with all categories of people. Be them: students, teachers, parents, fishermen, traders, doctors, nurses, urbanites and villagers. He is a kind open-hearted man who embrace everyone with open arms. He is a great administrator with a track record of achievements in SPORTS, POLITICS and ACADEMIA. Alabi is a professor. His detractors often accuse him of his complexion. They accuse him of Albinoism. To his critics, he doesn't deserve anything good in this life.

Considering the trends in the analysis so far, what shows that Alabi cannot manage Ghana as a country? As indicated in the comparative analysis, Alabi is an achiever with enviable track record of achievements and qualities that over qualifies (if there is such a word) him to manage the affairs of the nation. I hope this answers the question.