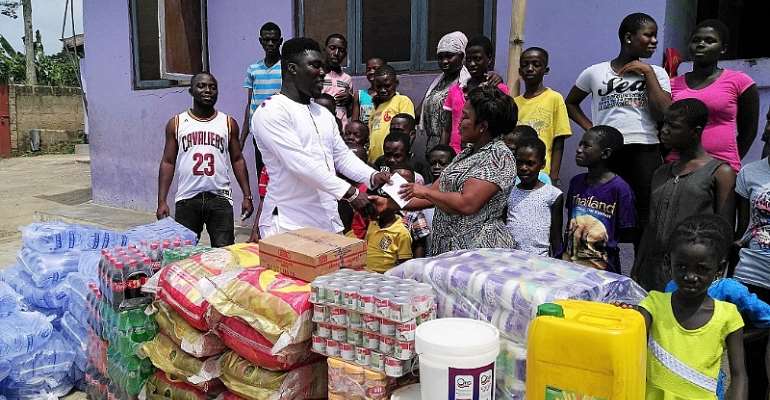 Daniel Martey Laryea, an Accra Businessman, Contractor and President of Zinaps Football Club on Monday celebrated his birthday with children of the Weep Not Child Foundation, an orphanage at Darman in Nsawam.

Martey Laryea, 36 also added an undisclosed amount to the donation to the charity which was received by Madam Comfort Owusu also known as Nana Ama Benewah I, (Development Queen).

She thanked Laryea for the gesture as they were planning on how to get the same items that was donated to them and thanked the media as well as the children and caretakers who have comported themselves neat and friendly.

Madam Owusu told Yours Truly how she was raised up by a single parent bearing eight children.

Her challenge to help others brought her to the Foundation aimed at supporting the Social Welfare Department to find good life for orphans and neglected kids.

Currently the Foundation has 53 children, but the project which started in 2007, 14 years ago has helped over 100 children.

She named the Pentecost Church at Nsawam as being of help to them and one Mr. Henry Agbeko.

Some of the activities practised in the school are beads making, sports, dancing and comedy.

Dan Laryea promised to register some of the players who display talent and discipline at his football club, Zinaps FC.

Conflict 'behind us', Ivory Coast's Ouattara says after gree...
55 minutes ago