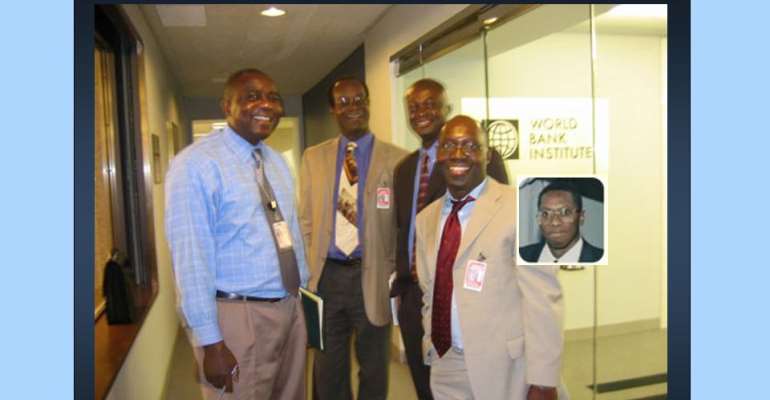 Dispersed communities have the potential to influence economics and wealth-creation to a much greater degree than generally considered likely. These diasporas also have the capability to promote, in the case of developing countries, de-centralized, knowledge-based, indigenous alternatives to the economic structures produced by the nexus of finance capitalism, multinational corporations and multilateral global institutions such as the World Bank. ~ GREGG ZACHARY [[email protected]], German Marshall Fund Fellow and Senior Writer at Time Inc's Business 2.0, San Francisco, California The World Bank Summit on Ghana exploring new development strategies, that brought together 50 delegates in Washington, DC, New York, Ottawa, and Toronto, Canada via videoconference, ended successfully at 4:00 pm on Tuesday, May 24, 2005. GCG executives Richard Korley and Yaw Owusu, who joined the event at the institution's headquarters in Washington, sought the World Bank's financial support for the Ghana Technology Park venture to bolster Ghana's growing IT economy. GCG also proposed setting up a consortium of media partners to include Africa Investor Magazine, Black Entertainment Television (BET) and BBC World Service to facilitate marketing of World Bank's proposed Africa Investment Capital Fund to multinational corporations and individual investors. The Africa Investment Capital Fund will be managed as a Multi-Donor Trust Fund (MDTF) with clear objectives, governance arrangements, and incentives for the Diaspora organizations and individuals to invest in it.

The World Bank is now open to working with private institutions such as Ghana Cyber Group as it explores innovative ways of harnessing the financial and knowledge equity of Africa's growing and influential expatriate community to develop Ghana and 9 other participating countries—including Senegal, Nigeria and Ethiopia. More than 12% of Ghana's global population of 23 million live outside Ghana, primarily in Sub-Saharan Africa, Western Europe and North America. MODERATOR KOFI ANANI, Operations Officer, World Bank Institute, Washington, DC

The summit participants debated on new approaches to strengthening Ghana's economy and made a number of recommendations to the World Bank Institute as it consolidates a commission report on development in Africa from the perspective of the Diaspora. Dr. George Ayittey emphasized African governments' failure in the past to implement innovative ideas and programs initiated by the World Bank and urged the institution to strengthen its resolve to working more with private corporations.

At the end of the 5-hour discussion, Mr. Kofi Anani announced that the World Bank would form a task force from among the Ghana Summit participants to join other Africans at the WBI in Washington, DC in June 2005 to design an action plan which the WBI and the African Union intend to discuss with major partners. Following the summit, Ivor Agyeman-Duah, Director of Public Affairs at the Ghana Embassy wrote: “The shift in paradigm at the World Bank which has made it a policy to include the private sector and civil society in discussions and partnerships on development show how the institution is adopting to global changes.”

Dr. Emmanuel Awuah, who led 20 delegates from Onondaga College, New York discussed the role of culture and history in development. Neglected often but if well coordinated, he explained, it could bridge the gap between Ghana and African-Americans. Dr. David Owusu-Ansah of James Madison University, who is also past president of the Ghana Studies Council, an affiliate of the African Studies Association of the U.S. and author of the Historical Dictionary of Ghana, encouraged more knowledge transfer and exchange programs between Ghanaian universities and North American colleges.

From Carleton, Canada, the team made up of more than 20 discussed capacity-building in relation to some of the major conference themes: utilizing ICTs to create knowledge and learning networks, stemming the brain drain without emphasis on physical relocation and the essence of an African investment fund. Among the group was Ghana's Deputy High Commissioner to Canada, Mr. Charles Aggyei-Amoamah.