The Chronicles Of Atiku Abubakar And The Fervor Of Nigerians 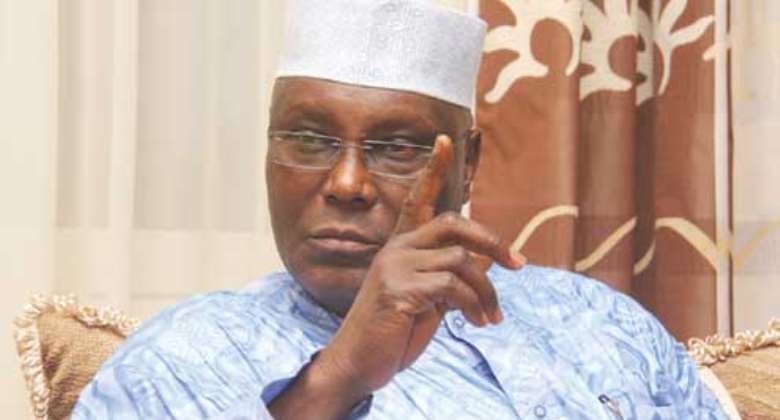 It is with great respect I commend the Senior Staff Club of the prestigious University of Nigeria, Nsukka for having gone in synch with the political realities of our country on the grounds of the increasing agitations of secession and its sister-chorus – “restructuring”. They are also deserving of superlative eulogies for organizing a public lecture having a foremost advocate of the country’s structural change as the lead masquerade, treating the university community to germane rhetoric of national sustainability. Mr. Atiku Abubakar who revels in his title of the Waziri of Adamawa and a member of the Board of Trustees (BoT) of the ruling party has in recent times, gone about with his gong bell calling for restructuring Nigeria. He has at several places and at several times claimed that restructuring Nigeria is the only viable option of sustaining the corporate spiritedness of a one Nigeria. This idea of his which I refuse to hurriedly appraise an ideal, is either a coincidence or a calculated attempt of solution orientation to match the increasing and threatening agitations of diverse groups in Nigeria. As usual of Nigerians not to be very critical of the tact of their political figures, it is expected that Mr. Atiku is gradually evolving into another eponym of the Buhari’s case as a “messiah of urgency”. It is on this note that Nigerians must be on the alert not to fail to question with superior logic the activities of not just the puppet but the puppeteer as advised by legendary El Haj Malik El Shabazz a.k.a Malcolm X.

Permit me to quickly make a brief exegesis of Nigeria’s restructuring history. The 1914 restructuring of the Niger area was outlived in 1939 subject to calls beginning from 1930 to ensure even representation of major tribes. Hence, the Northern, Eastern and Western regions came into being. Another restructuring came as a result of self-government agitations from 1945, which was bolstered by Anthony Enahoro’s call in 1953. This being achieved in 1957, had the three regions maintained as highly autonomous federating units, with the central government having lesser powers. As a result of ethnic agitations by some groups called minority, another restructuring came into place in 1964 adding the Mid-West region. At the dawn of the declaration of the Republic of Biafra, the then military government quickly made the regions weak by creating States out of them. Until 1999, Nigeria had 36 States and a Federal Capital Territory as federating units whose divisions were made at several times save to convened constitutional conferences. Today, there are now several calls to restructure the country again. But the “how” question facing the country’s proposed restructuring project is yet to be answered. While some proponents canvass for a return to the 1957 era, others are of same view with Chief Alex Ekwueme who proposed using the 6 geopolitical zones of the country and some others quest for the creation of more states with particular attention to the South-East for the purpose of balancing the structure. A close look at the 2014 National Conference report proposed willing merger for States or the creation of 18 more states to have 9 states each in all of the geopolitical zones. Whatever the case, there is yet no consensus on how the country should be restructured. If there is any to go by, then it should be that of the National Conference which seem very close to a representative feature of the dynamic population of the Nigerian polity.

Given the above exegesis, there is a common denominator of restructuring before the exuberant times of 1966 onward. That common denominator is the fact that every attempt to restructure the country was borne out of careful calculation over years and those times remain the best years of our country in every aspect of statecraft. Our problems started from the exuberant years of 1966, and hitherto, the country is yet to recover from such miscalculated efforts in perpetual failed attempts of pawning the so-called federating units to suit premonitions and tact of grandiose fellows. It is pathetic that Nigeria is yet to learn from its consequences of outright refusal to pay attention to details. Nigeria remains an unsystematic nation and has apparently thrown every systematic effort of hers into the undredged River Niger. Do we call it laziness, wickedness, cerebral imbecility or absolute structural mediocrity? Whichever we attribute to the system, it does not rule out the fact that Nigeria remains a country sailing a sea without a compass. It is no news that Nigeria since the 1950s has convened several constitutional and national conferences and is yet to record the minutest of implementation of any.

In 2014, the Federal Government in a bid to give into the yearnings of Nigerians brought together 498 representatives of diverse groups of the nation. They deliberated on issues of national interest and came up with an 898 paged document that chronicles recommendations on the way forward for the country. Surprisingly, these recommendations torched areas of political restructuring, power devolution, resource control, all sectors of statecraft, among others. Yet, a sane government of which Mr. Atiku remains a principal agent refused its implementation and Mr. Atiku was mute. More so, we must remember that as part of the constituents of the APC’s manifesto is political restructuring and power devolution and again, the party and all of its members went silent on them until the recent Atiku’s jingle. In fact, principal figures of the APC who we assume to be in the know of the word-crafts in their manifesto have severally considered the call to restructure or devolve power in Nigeria a child’s play. Now, in what I consider a rattle snake model, they have rallied round a restructuring committee consisting of all Roman Brutuses you can think of that are murderers of Caesar.

Let’s now have a rational reflection. Don’t Nigerians think that restructuring is now a ploy to become a 1st indigene of the Aso Villa? Don’t Nigerians think that we are once again playing into the traps of the hyenas and jackals? Gentlemen and ladies, the 498 representatives at the 2014 National Conference benefitted from our collective national resources in terms of allowances, inter alia. They made efforts to ensure a review of reports of all constitutional and national conferences since the 1950s up until 2012. They came up with a template that might not entirely satisfy our demands but offer a more systematic approach to our collective issues as a nation. It will be evil of us to throw that away and play into the hands of the recycled self-serving politicians whose rhetoric are like the daggers used in stabbing Caesar to death. If we must remain as a nation, we must start by being civil and learn to appreciate painstaking efforts of fellow countrymen and women who toiled that long to hand us a radar. In the now, I maintain that the 2014 national conference should be reviewed to reflect our current realities while diligent efforts in the latter can be made to produce a worthy template that would provide necessary conditions that will support the realities of Atiku’s restructuring. Let’s avoid falling into the ditch a second time since 2019 stares us in the face. Statesmen think of the next generation whereas politicians are inducted to think of the next election.

Thank you and best wishes!!
About the author: Agwu, Prince Chiemeka is an academic staff with the Department of Social Work, University of Nigeria, Nsukka. He has his specialty in social policy and is the founder of The Rhetorics Project which is a pet project of The Rhetorics Consult – a firm reputed for values’ reorientation and communication consultancy. He is a radical social worker, researcher, public speaker and social commentator. You can reach him via [email protected]