On My Way To Bole Bamboi With My Sheep And Schnapps.- Ayekoo Barima Mahama... 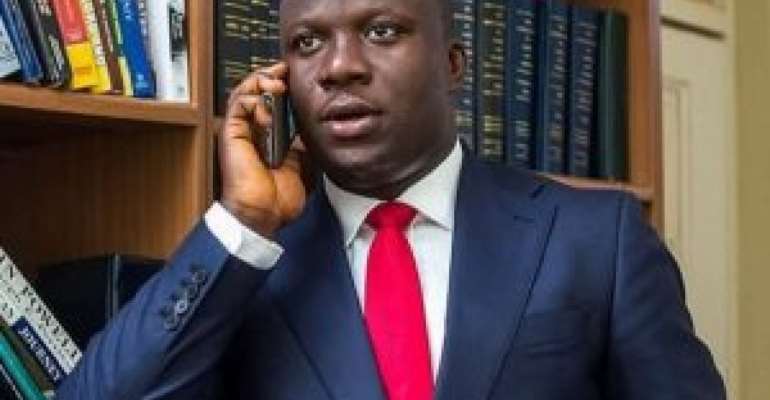 The person whose submission inspired me to write this "Thank you article" is Samuel Abu Jinapor the current Deputy Chief of Staff at the Presidency.After listening to the young man on Paul Adom Otchere's "Goodevening Ghana" show, I picked a picture of the former President John Dramani Mahama and soberly,said, "Thank you His Excellency". What prompted my reaction was his assertion espoused by Mr Jinapor that Ghana's economic indexes dwindled from 2012 till the Mahama administration exited office.

The question I asked Daavi who was holding "Have Faith" and sitting close was, does he really understand what he just said? Is he aware that the IMF cancelled Ghana's debt totaling over $45billion owed by Ghana in addition, other institutions including the Paris.

Club cancelled part of our debt is he aware. Ghana's debt to the Paris Club creditors was reduced from $1.94billion dollars to $300 million. The then Finance Minister Mr Osafo Marfo said $250 million which should have channelled into servicing the country's debt annually, would be used to provide infrastructure to accelerate economic growth. Can Samuel Abu Jinapor, point to Ghanaians where to find the infrastructure promised. Ghana was given billions of cedis to support our poverty alleviation programme including the 700 billion ghc which landed on the laps of Kwesi Nduom, can my brother tell us how that huge monies pumped into the system improved the economic situation of the masses. It is not about who has borrowed more or less, but the investments made from the loans contracted.

By the way, after all the reliefs the Kufour administration enjoyed, what was the true situation of the economy. He mentioned indexes, the period from 2005 - 2008 the budget performed continually much worse than planned. The overall broad balance registered deficit which was widened from 3% of National income in 2005 to 7.8% of national income in 2008 and let me remind him that we were told by the economic management team of the Npp administration that government doe not have the financial muscle to invest in GT and the sale of the Nation's asset ( GT ) was enshrined in the 2006,2007 and 2008 budget. We were finally told that we needed the $900m from the sale of GT to shore up the country's foreign exchange reserve to support the depreciating cedi. Kwame Pianim later told us we needed the amount to pay for salaries of workers. This was the state of the economy you bequeathed to the NDC.

Mr Jinapor, governance is about philosophy and style, a leader can choose to put out bedroom manufactured economic indexes,may dwell on indexes whilst the citizenry die on the road because of potholes, citizens die rampantly because of lack of access to medical facilities, supervise production of illiterates because of lack of educational facilities etc it is a matter of choice, populism versus purposeful leadership.

But does he know why import dependant nations intermittently suffer economic turbulence? Is he aware that today, our nephews, nieces etc in Bupei can travel to Accra with their health insurance card to access Health care? If no, then I am telling him that the outpatient utilization of the NHIS rose to 29.6 million in 2014 from 16.6 million in 2009 and the Authority ( NHIA) paid an unprecedented 1.073. Billion Ghc in claims in 2014 as compared to 362 million in 2009 and 7.6 million GHc in 2005.

That is investment and he shouldn't expect the economy to enjoy the needed space after all such payments. He must also find out the effect the implementation of the single spine salary scheme, had on the economy and why Otumfuo and other renowned economists met at Ho to deliberate on the issue. By the way, I hope my brother remembers what President Mahama then Vice and head of the economic team, achieved in terms of our inflation bringing the inflation figure to the single digit range. Yea, we recorded some reverses but Sammy should remind himself of the huge ToR debt they left behind and the attempt by the Npp to sell GCB because of debt distress.

Did I hear him say six months is too short a time to scrutinize activities of his government.. President Mahama was in court over the petition case for eight (8) months when the NDC faithfuls complained, the answer they got was that nobody had tied the hands of the President to his back.

Mr Jinapor, whenever you drive on that beautiful road to Bupei, also remember these landmark achievements to understand why we experienced ebb and flow in the economy.

1.The Atuabo gas plant which is saving Ghana about $500 million annually. Is he aware it now supplies 115 million standard cubic feet of gas per day and that the VRA thermal plant at Aboadze are able to generate 650MW of electricity from Atuabo gas?. Hope he witnessed the commissioning of the last FPSO named after President Kufour.Is he aware of the efforts made to unlock the hydrocarbon potential in the inland Volta Basin? Which represents 40% of the country's landmass. I am sure he heard about the 123 new community day secondary schools and the world bank/ government of Ghana schools apologies to Adwoa Sarfo.

2.You just don't build the schools you also must focus on improving the skills of the teachers. About 160,000 teachers representing 56% of teachers at the basic level received career development training.

3.Before I take you to Nkrumah's Dubai, let me kindly alert you that whenever driving around legon, thread carefully else, may miss your way. A 600 bed Teaching Hospital has been constructed at the place. The 420 bed ridge hospital expansion project, the over 1600 CHP compounds, the police hospital expansion, the district hospitals including the one in my Kwahu, the military hospital in Kumasi, the onuador mobile health vans.

4.One of the major achievements his government trumpet about is the decision by air France to start operating here. The decision was communicated to JM when he was in office and it was as a result of the renovation and expansion works at the ports including the domestic airports.

I will pick my brother to go see for himself the 12 storey Accra shippers House building at the Takoradi harbour, the training facility for Regional Maritime University. And in Tokoradi, we shall visit the Kojokrom- Sekondi- Takoradi railway line. Is my brother aware that as at the time of leaving office, the Bole Kingkong, had raided Ghana's road network to 71,906 kilometres? With 42,046 km being feeder roads?. The Dodi- Pepesu ,Fufulso- Swala, Burma Camp,Nkrumah interchange, Kasoa interchange, Enchi Dadieso, Nsawan to Apedwa, Agona junction- Elubo, Tarkwa- Bogoso, Kwafokrom- Apedwa, Kansaworodo bypass roads etc including my Nsawam- Aburi road. In 2015 alone, the Mahama government, undertook routine maintenance work on 7,228km of trunk roads, 7,471 km of feeder roads and 5000 km of urban roads.I know my brother uses the Eastern corridor road .

3. What about the housing schemes the 5000 affordable houses at Saglemi etc.

4.He better check where the Mahama administration increased urban water coverage to before leaving office and must know that Ghana is now second to South Africa in terms of electricity coverage.

5.I am sure visiting my father King Jinapor at Bupei used to be a difficult move for Samuel all because of internet problem.Today the jargon is "Everywhere you go" in 1997, Ghana possessed 105,000 fixed lines and 7,500 analogue cellular subscribers, in 2014 it has jumped to 29,220,602 mobile subscribers and 13,962,602 data subscriptions.Hahah, the Eastern corridor optic fibre, the business outsourcing centre which is offering jobs to over 10,000 Ghanaians, the ICT Park, the enhanced community information centres, the Tamale NCA office, the BPO center, the massive transformation in the ICT sector including the e- government network project, the magnificent DATA centre which is the number one in the whole of Africa.

I will continue in my next episode. I am heading to Bole Bamboi with my bottles of schnapps and my sheep. I am going to respectfully ask the elders of Bole to thank the gods and ancestors of the land for giving Ghana this clever son and to personally visit the tomb of Mr E.A Mahama to thank him. On Sunday, will worship with the Presbyterian church for the giving E.A their Presbyterian training which guided him to reach that enviable height.