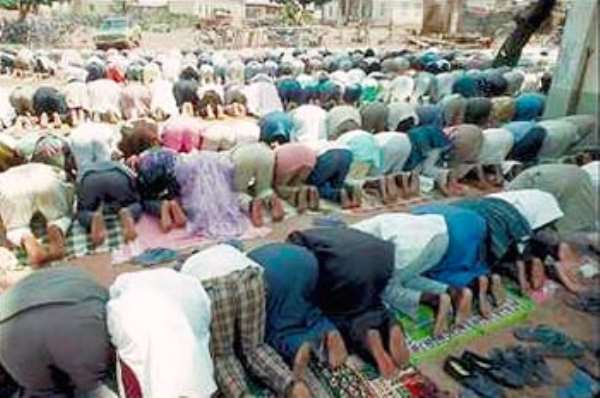 Obuasi, May 30, GNA - The Obuasi Muslim community at the weekend held special prayers at the Central Mosque for the President, John Agyekum Kufuor and for the peace, stability and development of the nation.

The prayers, organised by the local Council of Muslim Chiefs, also covered the growth and viability of AngloGold Ashanti and the Adansi State.

The Obuasi Zongo Chief, Alhaji Gibrin Ibrahim said the annual event was meant to accelerate national development. "We are praying for AngloGold Ashanti, because the growth and development of the company, determines the very survival of the people in the area", Alhaji Ibrahim said.

Nana Asirifi Asare II, Krontihene of Edubiase Divisional Council and the Presiding member of the Obuasi Municipal Assembly who represented the Adansihene, Nana Ofori Agyemang II at the function commended the initiative of the Muslim community. He said there was the need for Ghanaians, especially religious groups to work for the peace of the nation.

He said the growth and viability of AngloGold Ashanti was a shared responsibility and appealed to Muslims to lead the crusade against small-scale mining activities popularly called, 'Galamsey' that was disturbing the operations of the company.

Nana Asirifi Asare urged them to register with the National Health Insurance Scheme to deride the numerous benefits. The Muslim chiefs later slaughtered a cow as a sacrifice to Allah for listening to their prayers.