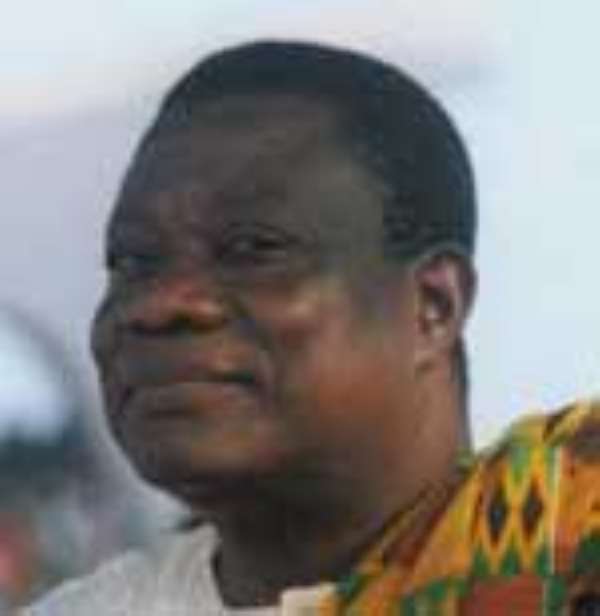 Accra, May 27 (Daily Graphic) -- The former Vice-President, Prof John Evans Atta Mills, has expressed concern about recent developments surrounding the purchase of a hotel in Accra, which was threatening the image and credibility of the presidency.

“As a former vice-president and twice contestant to President Kufuor in presidential elections, I feel ashamed about what is going on, “Prof Mills said, and added that at the appropriate time he would come out with a full statement on the matter.

Prof Mills who stated this when he addressed a well-attended rally at the Jackson Park in Kumasi yesterday, after the “Wahala” march, organised by the Committee for Joint Action (CJA). He said, “the truth cannot be hidden and that is what we are seeing today.”

Organisers described the march, dubbed “Wahala 4”, as the biggest so far in the country.

They put attendance at more than 4,000, and they were confident that coming out successfully in Kumasi, which the NPP considered their stronghold, there was every indication that the people of the country were fed up with the policies of the government.

Six hundred policemen provided security for the demonstrators who were registering their protest against the 50 per cent increase in fuel prices, and general economic hardships in the country.

The three-hour peaceful demonstration started at the Post Office Square, and went through the Prempeh II Street at Adum, the Central Market, and Roman Hill, before the demonstrators converged at the Jackson Park, where their leaders addressed them.

Some of the placards carried by the demonstrators read, “We are suffering, while NPP members continue to milk the nation”, “Kufuor keep to your word of corruption”, “You cannot continue to cheat the nation”, and “Reduce fuel prices now”.

As the crowd traversed the distance from the starting point to the Jackson Park, many people emerged from their stores and other places to watch them.

The police had little trouble controlling the crowd as everything went on peacefully. Initially many people thought the demonstration could degenerate into violence since Kumasi was the stronghold of the NPP.

The Ashanti Regional Secretariat of the NPP had earlier issued a statement calling on its supporters to stay clear of the demonstration, warning that those found in NPP T-shirts could not be described as NPP sympathisers.

Prof Mills thanked the police for the wonderful professional display and said the occasion also underlined the CJA's earlier assurance that it would not indulge in any form of violence.

Alhaji Ramadan, who also addressed the crowd, said the government was not able to achieve its revenue target for the first quarter of the year because of bad economic policies. He, however, did not give figures.

He said it was an insult for the NPP government to tell the nation that if it reduced fuel prices that would send signals that the government was weak.

Madam Benyiwa-Doe also touched on the hardships fuel price increases had brought to the ordinary people and said it showed that the government did not come for the good of the nation.