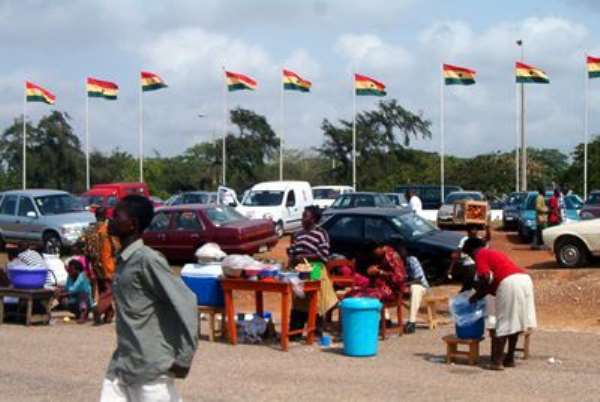 Accra, May 25, GNA - President Olusegun Obasanjo of Nigeria and current Chairman of the African Union (AU) on Wednesday appealed for peace in conflict areas in Africa, saying: "We cannot achieve the desired progress if there is no peace and stability."

He said Africa could not afford the unfortunate distractions of spending too much time and resources on unending conflict resolutions, when it needed to remain focused on realizing its developmental goals. "We must avoid the needless destruction and disruption of lives and properties, which crisis creates. Indeed, we face the risk of no longer being taken seriously by the rest of the world if we fail to properly manage and resolve our conflicts", he said.

President Obasanjo made the call in a message read on his behalf by Mr Moomun Labat, Malian High Commissioner to Ghana and the Acting Dean of the African Diplomatic Corps, at a flag-raising ceremony to commemorate the 42nd anniversary of the Africa Union Day at the forecourt of the State House in Accra.

Instituted in 1963, by the then Organization of African Unity, now the African Union, the Day commemorates the legitimate aspirations of the peoples of Africa, and affords member states the opportunity to reaffirm their commitment to the objectives and ideals of the AU and the need to marshal its collective efforts towards sustainable development. President Obasanjo noted that the newly found commitment of Africa to achieve the desired transformation from a Continent of problems to a land of prosperity could be measured by the steps taken so far by the AU to bring about sustainable socio-economic and political reforms. However, the AU, he said, faced its first major litmus test early this year following the succession crisis in Togo, which trailed the death of President Gnassingbe Eyadema.

President Obasanjo noted that it was a situation the world watched with keen interest to evaluate Africa's ability to resolve its own problems and commitment to entrench the democratic values required for development.

He said the management of the crisis in Togo offered the people an opportunity to determine who governs them, as demonstrated by the democratic elections held in April this year, describing it as "a cheering development applauded by the international community".

President Obasanjo said that judging from the AU's firm stance against unconstitutional change of governments in Sao Tome, Central Africa Republic and Togo, as well as the democratic transition of power in other countries, the AU was achieving progress in its efforts to sustain democratic practice, values and institutions on the Continent. He, however, noted that the evolving success story of political reforms in Africa was not restricted to democratic changes alone, but that good governance, the implementation of development programmes, transparent and accountable leadership had become benchmarks for African Leaders.

The AU Chairman observed that it was heart-warming that the New Partnership for Africa's Development (NEPAD) had been received both within and outside Africa, as a credible mechanism for the transformation of the Continent, thus the strong will shown by the its development partners to help to realise the desired objectives. "On our part, we must continue to strive to promote the new image of Africa as a forward looking Continent, which is why the steady progress of the African Peer Review Mechanism (APRM) is significant."

He noted that with nearly half of the member states in the AU acceding to the APRM process and the increasing number either having completed or currently undergoing the process, it was clear that Africa of today was one conscious of its obligations and commitment towards good governance as a foundation for sustainable development. "The gains of NEPAD may be slow but let there be no doubt about the steady progress which if sustained, will crystallise in a peaceful and economically prosperous Africa for future generations."

President Obasanjo also decried what he described as a disheartening trend where funds from Africa found their way into the financial system of a number of G8 countries through the corrupt practices of public officers and the connivance of foreign collaborators remain trapped.

He said that in spite of pleas that such ill-gotten wealth should be returned to facilitate development projects, the Continent's international partners were slow to respond, stating: "We shall continue to appeal to them to repatriate our stolen money."

The AU Chairman stressed that to achieve the Millennium Development Goals (MDGs) in Africa, the Continent required an adequate inflow of finance, through debt relief, repatriation of corruption-tainted funds and the fulfilment of the commitments made by development partners.

He reiterated the commitment of the organisation to relentlessly tackle the issues of food security, HIV/AIDS, Malaria, tuberculosis and other infectious diseases that besieged the Continent.

Nana Addo Dankwa Akufo-Addo, Minister for Foreign Affairs noted that in spite of the many achievements of the OAU, particularly on the issues of decolonisation and apartheid, the challenges of poverty, economic development, globalisation, conflict resolution and the ravaging HIV/AIDS pandemic, had made it imperative for its successor, the AU, to reposition the Continent on a strategic path towards eliminating the various impediments to its development.

"Short of this, Africa risk continued marginalisation in the global economy and world affairs", he said.

Nana Akufo-Addo said as Africans reflected on their common heritage and reaffirmed their commitment to the ideals of the AU, they must fully acknowledge the fact that nobody had a bigger stake in and a greater responsibility for developing Africa than Africans. He said it was, therefore, necessary for Africans to restore confidence in their collective ability to create a self-sufficient, self-sustaining, self-reliant and competitive Africa capable of deriving maximum benefits from the process of globalisation in order to enhance the living conditions and welfare of its impoverished people in conditions of democratic accountability and respect for human rights and the rule of law.

The Foreign Minister reaffirmed Ghana's support for and commitment to the ideals and objectives of the AU, adding: "We will continue to co-operate with other member states of the Union in order to realise the Organization's laudable and important objectives. Ministers of State, Members of the Diplomatic Corps, Parliamentarians, civil society organisations, representatives of political parties, traditional leaders and students attended the ceremony in which the flags of both the AU and Ghana's were hoisted to mark the day.