The Over $15B From China Is Not A Loan: Stop Lying Dr Bawumia 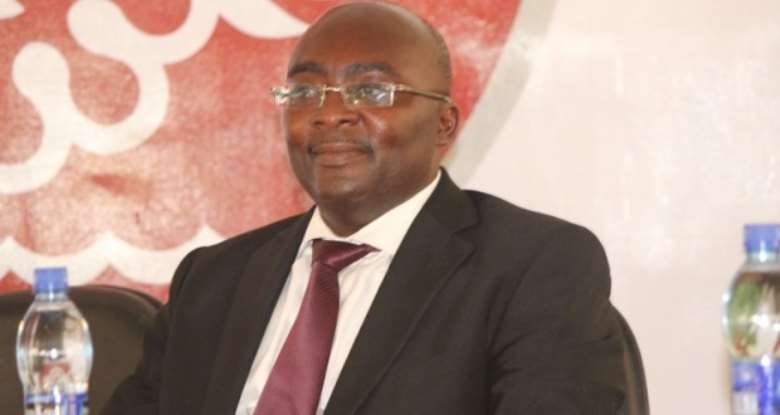 We are being told that Government is seeking to leverage Ghana's natural resources through its recent partnership with the Chinese government that saw China pledge to commit over $15b to Ghana's economy. The Vice President Dr Bawumia is telling us the facility is not a loan, the deputy Finance Minister described the facility as a loan and government communicators are giving us conflicting stories about the facility.

I don't know why the Vice President is struggling to deceive Ghanaians with his economic jargons when he knows very well that leveraging your mineral resources for such a facility doesn't make the facility a gift.

He was in Zimbabwe and knows how this same arrangement affected the economy and life of the people negatively.Zimbabwe has virtually all the minerals for diversified industrialisation. However,through same lazy arrangements, all of its mineral wealth is being exported as ores,concentrates,alloy and metals.

The minerals remain our property and what we must do is, to find a way of adding value to them. Dr Bawumia know very well that part of the reasons why the Zimbabwean people are languishing in poverty with low infrastructure development in many parts of its rural zones is this wholesale handing out of the country's mineral resources over the last three decades costing the country millions of jobs.Is Dr Bawumia aware that Zimbabwe has runout of alluvial diamonds at a time when the country has been allowed to sell its gems on the global market.

This is one of the dangers associated with this lazy and hasty arrangement. Who told Dr Bawumia and those blowing his trumpet for him in the media that, leveraging our resources for the facility is the newest prudent arrangement. it is a new policy adopted by China to get enough mineral resources for its economic activities. China is facing a rapid depletion of its local mineral resources.Reserves to production ratio that represent the burn rate of proven reserves of mineral commodities when applying current levels of domestic mine production shows that China is in the RED ZONE for future supplies of nearly all crucial minerals.

To overcome shortage of essential mineral commodities, as well as secure long-term sustainable supplies for its ambitious development agenda,the Government of China has empowered a number of domestic state owned and private companies to actively pursue mining deals throughout the world through a strategy known as TWO RESOURCES,TWO MARKETS and advocate for the pursual of mining projects all over the world.

It will be in the interest of Dr Bawumia and his team to tell Ghanaians the full facts behind the facility than this deceitful approach they've adopted in connivance with their friends in the media. His deceitful description of the facility makes it more dangerous and unacceptable.Africa is seen as the most desirable region for China and Hong Kong based companies hunting for mining deals globally. Dr Bawumia should also find out from the authorities in Botswana and DRC how this unholy arrangement affected their economic fortunes and how it nearly strained their relationship with the west.

Chattam House recently came out with an information about the data used in analysis of investment pipelines for 2007-2013 and beyond and in that report, it was revealed that an adjusted number of China controlled mining assets in Africa could be even more impressive due to the fact that deals are not always made public. What happened in DRC involving Gecamines, the state owned mining company and China over nonferrous metal mining and Glencore mining deals which was employed China should guide the thinking of those falling for this dangerous deal. From the little I know about this particular arrangement, I know there are trade- in deals which will definitely come up soon.

I wasn't surprised when the deputy finance minister said something different from what the vice president said because, it is difficult to get a completely accurate of Chinese ownership of commodities globally that is part of the concepts they have adopted to outwit their partners.

We are not different from the people of Britain. The most outstanding resources of Britain is in its coal and iron. Coal was of no practical importance before the industrial age but check how it made gains from it.Watt patented his steam engine and Derby first melted iron. Now, Dr Bawumia and his guys should go and read the full report on how China planned this deal. This is one of its core arrangements as it embarks on its minerals exploitation deal

I I heard Mr Bright Akwetey somebody I respect so much, also succumb to this satanic arrangement. He should go and read the United States report on this dangerous deals African leaders are aggressively entering into with China and the longterm effect. And I can promise Mr Akwetey and all those spearheading this wicked arrangement that, posterity will mention their names in tears. What didn't the politicians tell us about Obuasi, Akwatia etc and people will easily fall for the usual tricks embarked upon by the politicians.

I am begging to have a feeling that the galamsey fight is an arranged stage game by this government and its partners in China to create the needed space for this wicked deal.