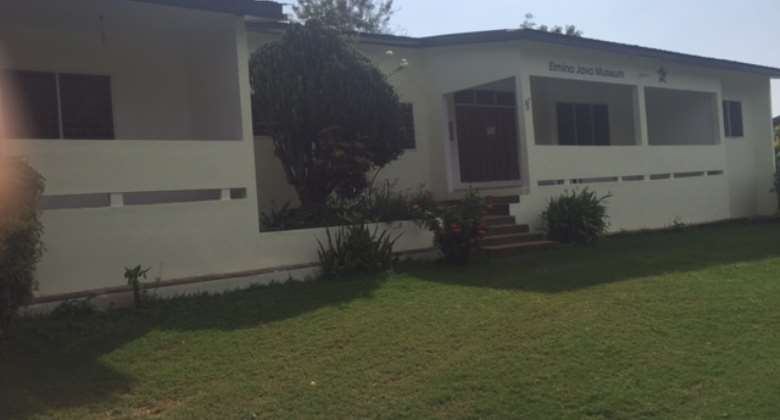 The Elmina-Java Museum has received an addition to its permanent collection from Vlisco worth 3000.00 Euros, which details the history of the apparel commonly worn across West Africa and beyond, known as wax prints. The permanent exhibit of the museum highlights photo artifacts of the Black Dutchmen (Belanda Hitam), who were 3080 African soldiers. A very small minority were from Elmina. However, the vast majority were recently manumitted slaves from Ashanti, who were conscripted and contracted as soldiers to fight for the Royal Dutch East Indies Army (KNIL) in Indonesia in the 1800s.

Additional collections document the longstanding relationship between Elmina, the Dutch and the Kingdom of Ashanti. The story of two young Ashanti princes, Kwasi Boakye and Kwame Poku, detailing their experiences in Europe and Indonesia form part of the collection. This piece of Ghana’s history is chronicled in the successful novel “The Two Hearts of Kwasi Boachi” by Arthur Japin. Other exhibits focus on the Transatlantic Slave Trade, aspects of Elmina’s own history, examples of Diasporan African cultures in Brazil and India and the 10 - generation genealogy of the Ulzen family covering 4 continents, whose foundation archives this history of Elmina and Ghana for posterity. The story of the Black Dutchmen and the founding of the museum in their honour is told in the historiographical novel, “Java Hill: An African Journey”, by T. P. Manus Ulzen. The museum also has reference books on this historical period for students of history.

The history of the Dutch presence in Elmina which began in 1637 ended with the transfer of Dutch possessions in the Gold Coast to the British in 1872. A trade agreement, the Elmina Treaty, was concluded between the British and the Netherlands as a result. This treaty was fiercely resisted by Elmina and the Ashantis, resulting in the total bombardment of Elmina in 1872 by the British. This period of British control continued until Ghana’s independence in 1957.

The Elmina Treaty shows that there was a thriving trade between the Netherlands and the Gold Coast. This usually happened through merchants like United Africa Company (UAC) who traded in all kinds of imitation batiks from the Netherlands, then later Dutch wax of Vlisco, Dutch gin of Henkes and all kinds of other products. The history of the Dutch wax is described in detail in this additional exhibition.

In unveiling the exhibit, Jan van der Heijden, Secretary of Foundation Afrikaanse Dutch Wax said “Your museum now places the history of the Belanda Hitam in a broader perspective of the Dutch presence in the Gold Coast”.

The Elmina – Java Museum supports culturally sustainable tourism. It provides tertiary education scholarships for youth in the Kommenda-Edina-Eguafo-Abirem (KEEA) District. It opened its doors to the public on February 15, 2003. It is operated by the Edward A. Ulzen Memorial Foundation (EAUMF) which also runs a medical volunteer program that has supported the work of over 200 healthcare volunteers in the district since its inception.

Its offices are in Elmina, Ghana and Tuscaloosa, Alabama, USA.

Visits are arranged by contacting the curator, Mrs. Lucy Obeng at 024-468-3599 or by email at [email protected] . Follow us on Twitter @elminajava for regular “GH History Moments” tweets.