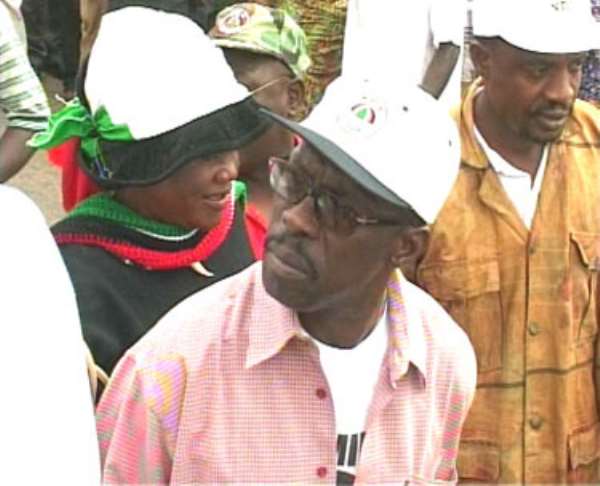 … the only thing missing was the music Former Deputy Defence Minister, Dr. Tony Aidoo has ridiculed the behaviour of the Kufuor brothers before a section of the army at the Burma Camp last week, describing it as “…the storming of Burma Camp by the Kufour Concert Party(KCP)”

In an interview with the NATIONAL DEMOCRAT over the weekend, he said what the President and his brother went to do before the soldiers was a pathetic display of mutual self-praise.

“The whole thing was a comedy in which the Kufour Concert Party, composed of the President, J.K. Kufuor and his brother, Dr Addo Kufuor, the Defense Minister. They took turns to praise each other: on one hand was Addo Kufuor praising his elder brother, thanking him for what he has done for the country. On the other hand was Agyekum Kufuor, responding to his junior brother by congratulating him for how he has managed the Ministry of Defence since the NPP came to power!”

According to Dr. Tony Aidoo, after five years of being in office, the Kufuor brother have come to realize that since the image of the NPP government was sinking, there was the high probability that the military, which in the past tendered to be dissatisfied with the conduct of civilian politicians, might be having second thoughts about the performance of NPP politicians,

“The purpose of the visit to the Burma Camp therefore was obviously to disabuse the mind of the military that the NPP government was corrupt, nepotistic and vindictive”.

Continuing, Dr Tony Aidoo said the show of mutual praise between the President and his brother was obviously reminiscence of the people's Assembly, which was also for the purpose of praising the incompetent Kufour to the hilt.

He said it was unfortunate that the Kufours took the military for granted and in what was an insult to the intelligence of the men and officers gathered there as well as the general public, they embarked on lies regarding the performance of the NPP government.

“According to Kufour, the charge of nepotism against him is not correct because J.H. Mensah and his brother, Addo Kufour, are seasoned politicians.

“Mr. Kufour obviously convincingly chooses to ignore the fact that his nieces and nephews are in the public sector either as Ambassadors, Chief Executives or personal secretaries.

“In addition, there is ample evidence to show that considerable privileges are given to the members of the Kufour family, especially in the award of construction contracts, timber concessions etc.

“Then again, Mr. Kufour forgot that when we talk about nepotism, it is not only about Mr. Kufour and his family: that in as much as he has put his family in prestigious public positions and gives them lucrative contracts, so would his followers do the same.

“So we find J.H. Mensah and his nephew at the Castle over seeing the National Institutional Renewable Programme and messing up; the Sykes- father, mother and daughter, and other numerous families who have more or less infiltrated the public service”, Dr Aidoo said.

If Ghanaians retained Akufo-Addo, we'll also endorse all his...
15 minutes ago