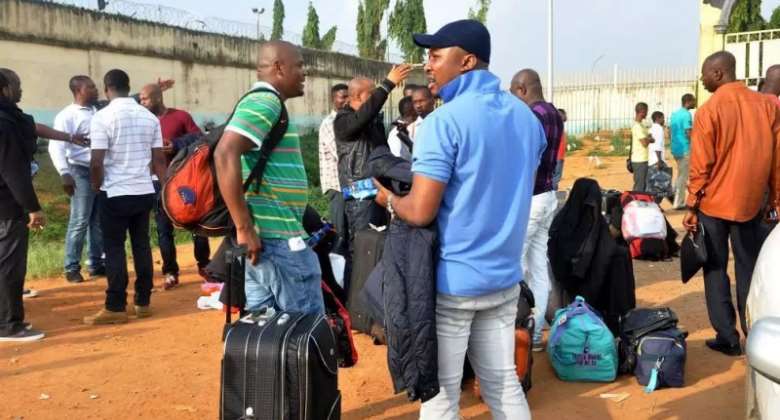 I write on this issue of deportation of Ghanaian nationals with pain, putting myself in the shoe of those who have been given this inhumane treatment by the American government. I am not by this saying, deportation is inhumane or illegal but the manner in which it is carried out, makes one to wonder whether the American government have little dignity and respect for Ghanaians who live there. Of course migration is largely natural, it is very common that citizenry from other countries travel to other countries where they think they can strive in life through employment of various kinds. Historically, deportation is not new and alien to many countries. At least, my history do tell me of the deportation act that was passed and implemented by the Convention People Party government in the early 60s.

A country may have tangible reasons for engaging in any deportation of foreign nationals BUT that cannot be done without considering diplomatic relation with other countries in contemporary times. For me, when Donald Trump led administration announced its intention to implement this mass deportation of foreign nationals, one question that came to mind was that, is America targeting African nationals? I don't personally have problems of any country trying to sanitize its economy but when such actions are taken without diplomatic discussions, one is left to doubt the diplomatic commitment of such a superpower nation who has been loud in international politics.

It was very disheartening to see my country men and women being dropped at the Accra Kotoka international airport.

http://www.myjoyonline.com/news/2017/June-14th/75-ghanaians-deported-from-usa.php Seventy-five Ghanaian illegal immigrants in the United States of America have been deported.

I am still wondering the sort of psychological trauma these victims of circumstances would be going through. Some were forcefully brought home without been given prior notice to pick their belongings.

What is more sad is the fact that some of them could not renew their visa documents for no fault of theirs simply because, they are perceived as illegal immigrants and were not given any opportunity to clear themselves. It is very conspicuous that many were not treated fairly before they were deported. Indeed, some of these people were in America through genuine means but could not produce their permit documents because of their inability to renew those documents from the authorities. They were simply denied any opportunity to renew those documents.

To add salt to injuries, many of them were handcuffed as if they were some hardened criminals that were chased and arrested. For what reason? Did they resist any orders to have warranted that coercion?

Would Donald Trump have accepted this if American nationals who are dotted across Africa were treated same way in the name of deportation? Well, that is the level of unfair treatment often meted out to Africans especially blacks in the soil of America but Africans still revere America as if it is a paradise. Certainly, imperialism is still dominant. For how long can Americans practise what they preach against? African leaders must be bold for once and let the West know that their hypocrisy and racial discrimination must stop.

As a history student, I have a fair knowledge of how Africans laboured in the American plantation farms to make America what it is today. That may be irrelevant to the subject matter but we need to remind ourselves that we are a hard working race and not criminals as others think. I'm not by this justifying any illegal migration to the west, but we must be treated with dignity so far as diplomacy is concerned.

I am also very disappointed at the government of Ghana for sitting aloof while our citizens are being meted out these levels of unacceptable atrocities by the American government. Do we have an embassy in USA at all? Come on! We can do better than this incompetent loud silence.

Government must show empathy for these people and should have put in place some mechanisms to take care of those deportees. We are already in a nation with high unemployment rates, profound polarisation and rising levels of social vices. That should have given us enough reason to come out with swift interventions to take care of these deportees so that they don't come to Ghana as liabilities to society.

May be it is also an opportunity to wash off our long time inferiority complex so that we can at least take radical steps in same manner to sanitize our nation especially in the area of mining where foreigners dominate in the much talked about illegal mining. This can be aligned to government intention of formalising the economy. We are rather chasing and victimising our own while foreigners engage in this illegality with impunity. It is sickening!!

We must also deport those illegal immigrants in our country who are destroying our environment. Enough is enough!!